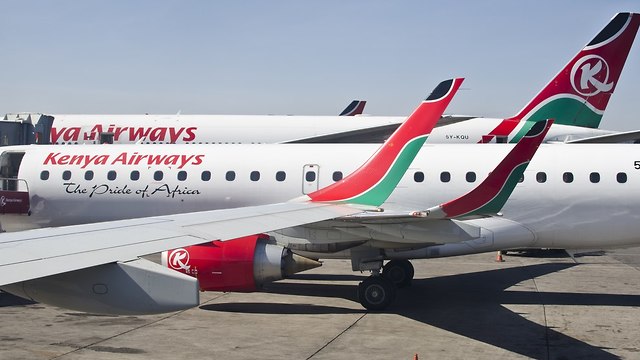 After Air India secured Saudi's permission to fly over its airspace to Israel, Kenya Airways now planning to begin operating weekly flights between Ben-Gurion Airport and Nairobi in 2019 through Sudan.

A Kenyan airline has submitted a formal request to fly its commercial planes over Sudanese airspace for flights from Kenya to Israel. The request, submitted by Kenya Airways, comes weeks after Saudi Arabia granted permission for the first time to Air India to use its airspace for a commercial flight route to Israel. The first Air India Boeing 787 touched down at Ben-Gurion Airport on March 22.

Kenya Airways is planning to begin operating weekly flights between Ben-Gurion Airport and Nairobi in 2019.

Last month, representatives from the airline visited Israel, where they held a series of meetings with officials in the Civil Aviation Authority and the Airports Authority to discuss the implications of launching the new flight route.

On Thursday, Minister of Transportation Minister Yisrael Katz met with the CEO of the east African airline, Sebastian Mikosz, to discuss moving forward with the plan.

Katz expressed his support for the move. “There is a great deal of political and tourist importance in the African market. The Open Skies agreement has a broad impact on the development on flight routes to Europe and to east Africa,” he said. “Opening the skies is a growth engine for the Israeli aviation market. The increase in the supply of flights to Israel continues, as do the number of direct flight routes to Israel operated by airlines,” Katz continued.   “The competition (in the market) has been maintained and has even grown, together with the growth in passengers' movement to and from Israel. We are continuing to develop the aviation routes to Israel. The competition increases the supply, while lowering the prices of airline tickets.”

Israel and Sudan have no diplomatic ties, and the two nations share mutual hostility. However, the Sudanese government has recently began distancing itself from the Sh’ite Islamic axis led by Iran and forging closer ties with the more moderate Sunnis.

With relations souring as a result, Sudan severed its diplomatic links with Tehran two years ago in what was likely a bid to curry favor with the United States and with Saudi Arabia.

In a telegram leaked to WikiLeaks, an advisor to the Sudanese president said to a senior US official: “If things were going well with the US, you might be able to help us with Israel, as they are your closest ally in the region.”

In the past, Sudanese and foreign media have accused the Israel Air Force of carrying out an attack in Sudan intended to thwart an attempt to transfer weapons to the Hamas terror group in the Gaza Strip.