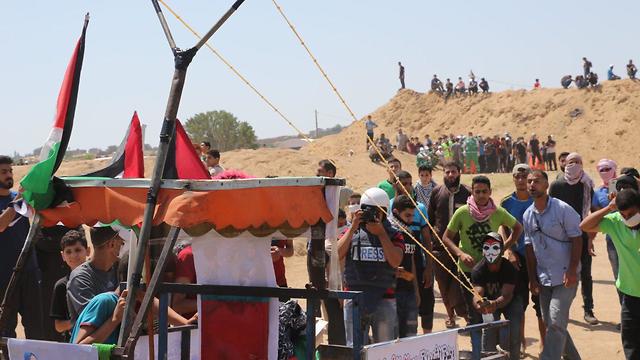 With no more tricks up its sleeves, Hamas has become more dangerous

Analysis: After dozens of Palestinian fatalities and thousands of wounded, Hamas has reached a dead end. It has no answers to give its public. The failure of the ‘Marches of Return’ project has turned it into an even more radical organization, looking for a way into the Iranian axis. As a result, the anarchy on the Israel-Gaza border will continue.

The Security Cabinet, which met Sunday to discuss the Israeli policy vis-à-vis the Gaza Strip, should be presented with the main lesson from last Friday's events on the border fence: Hamas has no more tricks up its sleeves.

It has no more patents to improve its status. All it is left with to remain relevant is continuing the protests to secure the sequence of violence and maintain the military tension vis-à-vis Israel.

After dozens of Palestinian fatalities and thousands of wounded, Hamas has reached a dead end. It has no answers to give its public. It tried a reconciliation with the Palestinian Authority—and failed. It turned to Egypt—and was let down. It tried a "hudna" (calm) with Israel—but received no response. It’s even losing Qatar’s support. It also tried the “Marches of Return” on the fence, but learned over the weekend that the move failed to yield any diplomatic fruit.

This organization is suffering from a governance crisis, but is still standing on both its feet. Hamas hasn’t been dealt a real blow from Israel that would give it the feeling its rule might be in danger, which is why the failure of the “Marches of Return” project in the past few months has turned it into an even more radical organization, looking for a way into the Iranian axis. As a result, the anarchy on the Israel-Gaza border will continue.

The riots on the fence will likely die down in time for the Eid al-Fitr holiday in the coming week, and during the World Cup. Then, in the summer months we are expected to see different levels of violent outbursts, which could reach a wide-scale conflict.

Last week, the Air Force practiced a plan for simultaneous fighting on two fronts. The timing isn’t coincidental: Following situation assessments, the IDF chief of staff instructed the army to be prepared for a conflict breaking out in the north followed by a conflict breaking out in Gaza. An opposite situation, in which a conflict in the strip sets the north on fire too, is less likely to happen, but it exists in light of the tightening relations between Hamas, Hezbollah and Iran.

Friday’s events didn’t turn into the highlight of the protest that began in late March, as Hamas had hoped. On the contrary. Israeli officials explain, in retrospect, that it was a failure foretold, as the last Friday of the Ramadan holiday is a family event and many preferred to stay home in the heavy heat. The “Iranian Jerusalem Day” idea didn’t exactly excite Gaza’s residents either, and Israel’s threats—including an IAF show of force—did the trick. The Palestinians reported activity of IAF and ground forces in the strip, burning tires, kites and encampments to disrupt their logistic preparations.

On the security side, the IDF provided the required results and curbed the waves of protestors trying to breach the fence. The “marches of millions” threat evaporated. But the army’s activities reinforced a new pattern of routine security conduct on the fence: Since March 30, the IDF has been operating vis-à-vis a hot and threatening border 24/7.

The shock on the Palestinian side following Nakba Day, in which 62 people were killed, has largely shaped the nature of the battle: The two sides haven’t put out the flames but have limited their height for now, so as not to reach dozens of casualties again.

If it wishes the change the violent status quo on the fence, the cabinet will have to make some decisions. First of all, it should accept the IDF recommendation to ease the siege in order to give Hamas an opportunity to present an achievement. For example, to allow—at the request of the Gaza border communities, and with the IDF’s encouragement—thousands of laborers from the strip to work in Israeli fields. It won’t be easily approved as long as the Shin Bet objects.

The cabinet can also decide to advance the project led by the UN envoy to transfer funds to Gaza, bypassing Hamas and the PA. There is goodwill in the world, but no one wants to fund infrastructures that could be erased in a bombing.

The victims Hamas sacrificed don’t justify its poor diplomatic achievements. Europe is the only place where it has recorded an international achievement: For the past three months of violence, Israel has failed to get through to the public opinion in friendly Western countries and to torpedo the Palestinian narrative. The European leaderships—even if they do sympathize with Israel—are subject to hostile public opinion against Israel. And this is another reason for Hamas to keep creating shahidim.