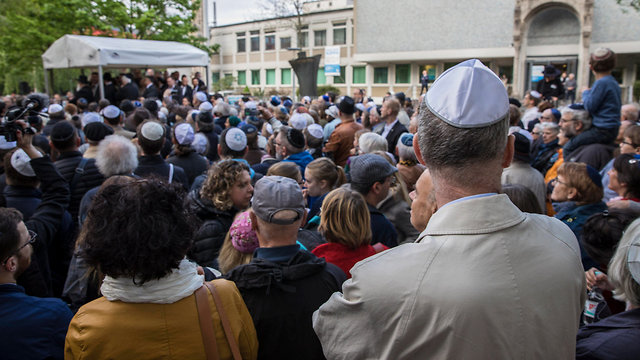 Op-ed: Sixteen percent of German population declared in a recent survey that they don’t like Jews, but president of Central Council of Jews in Germany—who advised Jews to avoid wearing a skullcap in big cities—wants us to take comfort in the fact that ’80 percent are not prejudiced against Jews.’

Let’s talk a bit about today’s Germany. Nearly 83 million residents, one of Europe's biggest countries. Between 100,000 to 200,000 Jews, most of whom arrived from Russia several decades ago after the German authorities invited them and helped with their absorption.

“Germany needs a Jewish population,” the authorities announced at the time. By the way, some of the “invitees” weren’t even Jews or weren’t Jewish according to Halacha. In Russia, after all, there was no problem purchasing certificates and permits of all kinds. I remember cases in which the husband received financial support from the Jewish community, which included some 28,000 people at the time, and his wife received aid from the Catholic Caritas organization.

And now to anti-Semitism. In a recent survey, 16 percent of the population—about 13 million people—declared they didn’t like Jews, to say the least. About 70 percent of the respondents further stated that they were strongly against the oppression of Palestinians by Israel.

There’s no surprise here, if we know, for example, that two Muslim rappers—Kollegah and Farid Bang—recently won the Echo award, a sort of “Oscar” for the country’s most popular artists. The two, who always perform in front of sold-out crowds, often ridicule Holocaust survivors and their songs are littered with anti-Semitic expressions. After their win stirred a public row, the prize was cancelled, but the committee that delivers the award found no fault in their selection.

And if a leading newspaper like Süddeutsche Zeitung publishes a cartoon of Prime Minister Benjamin Netanyahu with all the “characteristics” that Joseph Goebbels gave the Jews (a long, crooked nose and big ears), and the paper’s editors decide to bid farewell to the cartoonist only after an uproar from Jewish circles, that says enough too.

And now to Dr. Josef Schuster, president of the Central Council of Jews in Germany, who recently advised observant Jews not to wear a skullcap in big cities to protect themselves. I’m having trouble accepting the arguments presented by “the No. 1 Jew in Germany” to Itay Mashiach, Yedioth Ahronoth correspondent in Berlin. His explanations prove that he fails to understand the situation or doesn’t want to understand it.

On the one hand, Schuster says Germany’s Jews are in no danger and have no reason to consider leaving. On the other hand, when he is asked whether the fact that anti-Semitism is still present in Germany in 2018—despite politicians’ efforts—isn’t evidence of the failure of Jewish life in Germany, Schuster replies: “Definitely not a failure. There has always been hostility towards Jews among 20 percent of the population, even when the community was much smaller. But we must also remember the opposite conclusion, that 80 percent are not prejudiced against Jews.”

That’s an argument I have yet to hear. It’s like saying that in a certain country “only 20 percent are criminals.”

Addressing the immigration of Jews from Germany, Schuster said: “Thank God, there is no such danger.” Thank God?

Schuster also argued that anti-Semitic manifestations were more common in big cities like Berlin, Cologne and Munich, but that the situation was different in the small cities. As someone who has visited hundreds of school classrooms and addressed thousands of students, mainly in Germany’s small cities, I would like to reveal to Dr. Schuster that he is wrong and that the truth is actually the opposite. Berlin and Cologne don’t represent Germany. The small cities do, and anti-Semitism is much more common there.