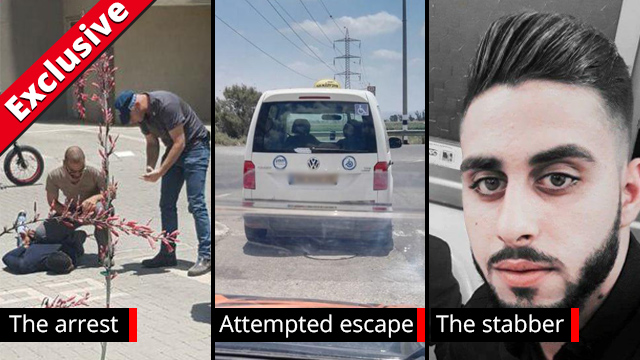 After hearing of the stabbing of an 18-year-old girl, Tomer Mazal Tov spots a suspicious-looking young man and follows him as he enters another taxi and then gets off and flees on foot—all the while reporting everything to the police.

Taxi driver Tomer Mazal Tov was the hero of the day Monday when he followed the attacker who stabbed 18-year-old Shuva Malka in Afula, helping the police apprehend him.

Mazal Tov told Ynet he was heading out of the city towards the Amos army base with a passenger when his friend called him and told him about the stabbing.

"He told me a terrorist was at large in the city, and that I should be careful," Mazal Tov recounted.

"As I was heading out of the city, I saw a young man walking on a path in the field on the side of the road. He was dressed in long clothes in the terrible heat and that aroused my suspicion," he explained. "I dropped off the passenger who was in my car and asked him to continue on foot while I followed the suspect." The Palestinian, 20-year-old Jenin resident Nur Shinawi, stopped another taxi and got in. "I started following the taxi, while at the same time I called the police and told them about this," Mazal Tov said.
Police neutralize the stabber
X

"Based on the taxi's movement, I realized there was an argument going on between the suspect and the driver. At some point, the driver turned back into the city," he continued.

"On Jerusalem Street, (the other taxi driver) pulled over and the suspect fled the vehicle. I reported all of this to the police in real time," Mazal Tov went on to say.

"He went in between the houses on Jerusalem Street, the cops chased after him, and I drove to the other side of the street to block him if he got there. This is the point I started shouting at the police officers to stop him because he was getting away."

The police officers shot at the suspect's legs, and he collapsed to the ground. The officers then handcuffed him and evacuated him to HaEmek Medical Center in Afula for treatment, before handing him over to the Shin Bet for questioning.

"It felt good to play a part in such an incident. As far as I'm concerned, the most important thing is that he was arrested, and that he doesn't continue wandering around Afula," Mazal Tov concluded.

The Israel Police said that when Mazal Tov called their emergency call center, he was connected directly to the Yasam squad (Police Special Patrol Unit) that was on the scene searching for the suspect.

Listen to the taxi driver's call to the police
X

Listen to the taxi driver's call to the police

Below is a transcript of the conversation.

Police: "Hello? Did you call about a suspicion person?"

Mazal Tov: "Yes, but he got on a taxi already. I'm following the taxi."

Police: "Where are you now?"

Mazal Tov: "Say, do you have a description of the guy? Is he wearing long-legged light-wash jeans and a dark long-sleeved shirt?"

Police: "We don't have a description yet. No description. Where are you?"

Police: "We're heading towards the cemetery. Where are you?"

Mazal Tov: "I'm just getting past the cemetery, in the direction... he's about to turn right toward... he's on a taxi number...."

Mazal Tov: "He's on a taxi, yes, but he walked toward the exit from Afula, and then he ordered a taxi and the taxi took him back to Afula. There's something suspicious about him, bro. Wrote the number of the taxi, so you can have it if I lose him..."

Police: "Maintain eye contact with him, perhaps he'll get away. I'm with the caller, the suspect went on a taxi on his way to the Jezreel Junction. From Afula to Jezreel."

Police: "Did you get past the gas stop?"

Mazal Tov: "No, we're where the exit is after the cemetery, there's an exit right towards Jenin, towards the roadblocks. There's a police roadblock."

Police: "Ah, there's a roadblock. He's at the exit towards the roadblock?"

Mazal Tov: "Not yet, he's standing in front of the square. I'll give you the taxi's (license plate) number...."

Police: "There's a roadblock on the way to Jezreel?"

The taxi driver who drove the stabber told police the suspect spoke to him in Hebrew.

"He was almost in tears and said he has been walking for a long time. He seemed emotional and tired," the driver said, noting he noticed the man walking on the side of the road towards Afula's southern exit.

The suspect said he wanted to get to the Megiddo Junction. "I told him I wasn't going towards Megiddo, but back to the city, and he still got into the taxi," the driver explained.

He went on to say that when they reached Jerusalem Street, the suspect asked him to stop and then got off.

The driver stressed he "didn't see anything unusual on him: no knife, no blood stains."

Shuva Malka, 18, was on her way to school to take an exam when she was stabbed at a bus stop on HaBanim Street in Afula. She managed to take a few steps before collapsing near a café in the city center.

“We were sitting at Café Aroma,” eyewitness Yossi Levy recounted. “At around 11:50am, I saw a girl with a skirt running, and suddenly she fell down near the pedestrian crossing. She fell on the sidewalk and her bag fell off. Then we heard her murmuring, ‘I was stabbed, I was stabbed. The Arab stabbed me.’ She didn’t say anything else.”

Shuva, a high school student from Migdal HaEmek, was seriously wounded in the attack. After receiving initial treatment at HaEmek Medical Center in the city, her condition is now serious but stable, but she's not yet out of danger.

"Thank God a miracle happened here and the girl was saved," her father said. "We ask the entire nation of Israel to pray for her recovery."

Michal Malka, Shuva's mother, also praised "the great miracle from God, may His name be a blessing. We hope that, with God's help, she'll come out of it. I want to thank anyone who prayed for her. Keep praying."

Her daughter, she said "was on her way to a civics test when she saw a terrorist with a knife. She called out 'evil!' at him. He stabbed her cruelly several times."

Eli Gozlan, the commander of the Afula Police station, said the investigation was ongoing and there might be further arrests. He also did not rule out the incident was criminal in nature and not nationalistically motivated.