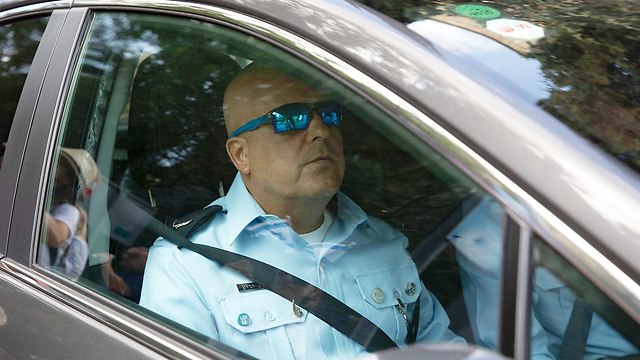 Prime Minister Netanyahu provides testimony to police investigators in submarine affair, also known as Case 3000; PM claims he did not know his personal lawyer and relative David Shimron was employed by Miki Ganor, who represented German conglomerate ThyssenKrupp in deal.

Prime Minister Benjamin Netanyahu told police investigators on Tuesday that he did not know his lawyer and relative David Shimron was representing Miki Ganor, the representative of German conglomerate ThyssenKrupp, in the submarine deal.

The prime minister gave his testimony in the submarine affair, also known as Case 3000, for five hours on Tuesday. He is not a suspect in the case.

Most of his testimony focused on weapons acquisition procedures. The investigators from the police's National Financial Investigations Unit wanted to learn the process behind sensitive security-related acquisitions and how decisions are made.

Netanyahu responded to the investigators' questions at length, explaining the decision-making process and insisting it was done impeccably.

Netanyahu was asked to testify—not as a suspect and not under caution—in the submarine affair, which involves several of his closest associates.

Police are investigating a corrupt system of alleged bribery over the purchase of submarines and patrol boats from Germany for the Israeli Navy.

Among the suspects are the prime minister's lawyers and relatives David Shimron and Yitzhak Molcho and his former bureau chief David Sharan.

The prime minister was expected to also be questioned in the Bezeq-Walla! News affair (also known as Case 4000), in which he is a suspect, but that was postponed to a future date.

This was the prime minister’s eighth meeting with police investigators since the investigations against him have begun. It came after a long break due to schedule constraints and the security situation on Israel’s northern border.

A statement from the Prime Minister's Office after the questioning had ended said, "Prime Minister Netanyahu provided testimony in Case 3000. He detailed at length the range of professional considerations that guided him in making the decisions on the submarines and boats and their importance to national security. The prime minister welcomes this opportunity to clarify the entire picture and put an end once and for all to the false claims made against him by other politicians."

Police plan in a future meeting to confront the prime minister with the testimony of state’s witness Nir Hefetz, who had linked Netanyahu to alleged quid-pro-quo relations with Bezeq’s controlling shareholder Shaul Elovitch and the Walla! News website.

Hefetz, who served as Netanyahu’s contact with the Walla! News desk, said that the Netanyahu family had received flattering coverage on the website in return for advancing regulations benefitting Elovitch in Bezeq. Hefetz claimed he was the person who implemented that policy.

During the investigation, and after he signed a state’s witness agreement, the police got hold of Hefetz’s cellphone, in which he allegedly received orders from the Netanyahu family—and mainly from the prime minister’s wife, Sara, and from his eldest son, Yair—as well as instructions to delete certain text messages.

Netanyahu has denied sending any text messages himself, giving Elovitch or Bezeq any benefits or receiving anything in return from the Walla! Website. Hefetz’s testimony, however, complements the testimony provided by state’s witness Shlomo Filber, the former Communications Ministry director-general, who has also linked Netanyahu to the regulation benefits given to Bezeq.

The Israel Television News Company reported last month that the police had submitted a request to the Prime Minister’s Office in April to question Netanyahu. According to estimates, the police would need at least three or four more questioning sessions for the prime minister in all three cases he is involved in: The illicit gifts affair (Case 1000), the Netanyahu-Mozes conversations (Case 2000) and Bezeq (Case 4000).

It was also reported that prosecutor Liat Ben Ari was expected to hand the summary of the investigation in Case 1000 to State Attorney Shai Nitzan, and that Nir Hefetz had provided the investigators with additional names and claimed that Sara Netanyahu had received credit cards during a trip to Manhattan and bought herself gifts with them.

The investigation in Case 2000 is expected to be resumed at the end of this week. Yedioth Ahronoth publisher Arnon Mozes is expected to be questioned again in the affair, as is Knesset Member Eitan Cabel of the Zionist Union.