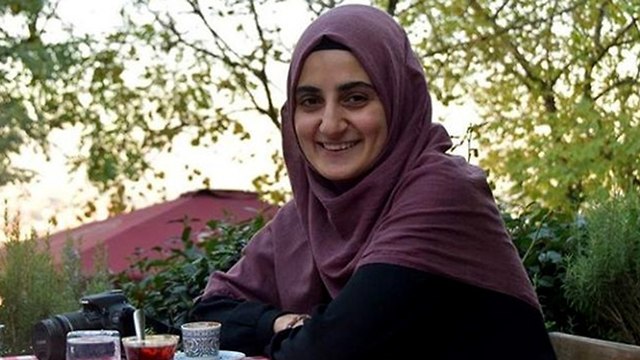 A Turkish woman who was scheduled to leave Israel was arrested at Ben Gurion Airport in Tel Aviv on suspicion of security offences, an Israeli official said on Thursday. The 27-year-old, who was identified as Ebru Ozkan, is "suspected of endangering national security and contacts with terrorist organizations," the official said Security services said that Ozkan has been taken in for questiong by the security services while heading for Turkey. An official declined to elaborate on the circumstances of her arrest or whether she had been assigned a lawyer ahead of any court proceedings.

Turkish Anadolu Agency quoted a lawyer for the woman as saying she was suspected of affiliation with a terrorist organization. The report, entitled "Israel extends arbitrary arrest of Turkish citizen", also said the woman's arrest had been extended in court until June 21.

The Turkish embassy in Tel Aviv, the report noted, said it was closely following the situation.

Ebru’s sister Elif Ozkan told the agency that she is accused of being a security threat and member of a terrorist organization while being kept at a detention center with no evidence or documents.

Elif claimed, according to the report, that her sister was subjected to unfair judicial proceedings.

“We could not contact my sister in any way. We could not even make a phone call. Even her lawyer could not speak to her, even though he was at court. The lawyer will meet with her on Monday,” she was quoted as saying.

“It is unfair and unlawful for a woman to be detained in this way. It's against human rights. Israel is approaching the issue politically. It's an arbitrary detention,” she added.

Relations between Israel and Turkey have often been tense in the past few years.

Turkish President Tayyip Erdogan has been a vocal critic of Israel's policy toward the Palestinians, an issue that resonates with many Turks, including the nationalist and religious voters who form the base of his support. Turkey holds an election on June 24.

In the run-up to the June 44 election, Erdoğan has used Israel as a tool to rally support, intensifying his invective against it and even threatening to look into his country's economic relations with the country after the vote.

In May, he compared the actions of Israeli troops in Gaza to Nazi Germany's treatment of Jews in World War Two.

"The children of those being subject to all sorts of torture in concentration camps during World War Two are now attacking Palestinians with methods that would put Nazis to shame," Erdoğan said shortly after addressing a rally of thousands of people in support of Palestinians.

His main political rival recently attacked him for signing “secret deal with Israel,” in an apparent attempt to score points as the country prepares to go to the polls in the presidential elections later this month.