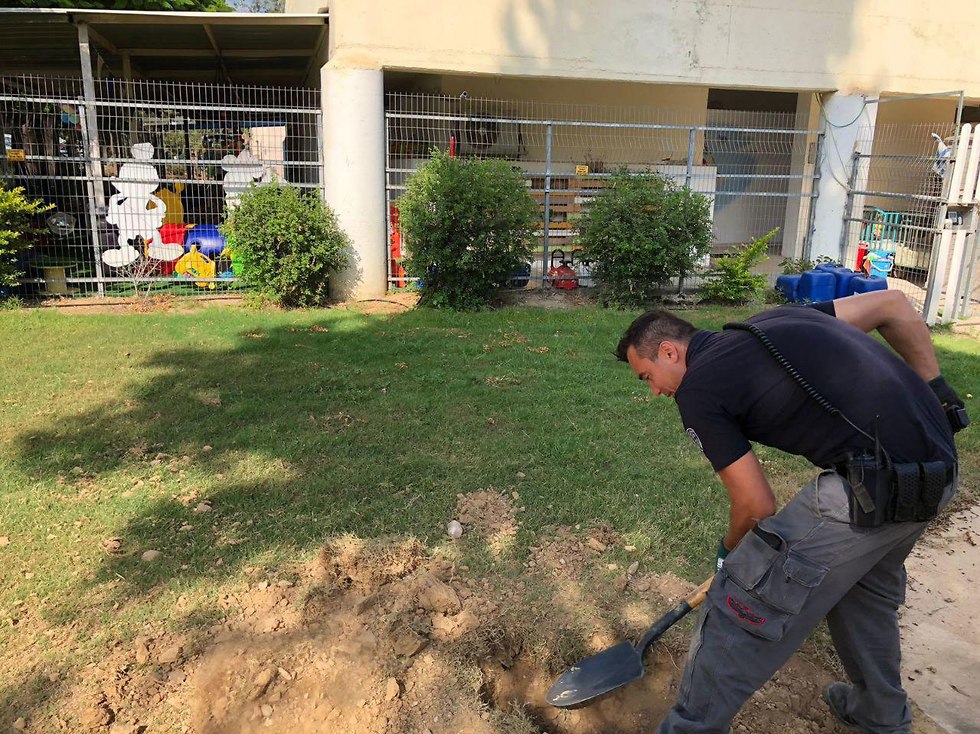 Barrages commence after IAF strikes a Hamas post in response to incendiary balloons launched from strip; more than 40 rockets and mortar shells fired at Israel, some causing damage. Seven intercepted by Iron Dome, three land inside Gaza. One mortar shell explodes on a pathway near a nursery in Eshkol Regional Council.

About 45 rockets and mortar shells were fired at Israel from the Gaza Strip on Tuesday night, some exploding in Gaza vicinity communities.

Seven rockets and mortars shells were intercepted by the Iron Dome air defense system, and at least three landed within the strip.

There were no reports of injuries, but damage was sustained. One mortar shell exploded on a pathway near a nursery in the Eshkol Regional Council.

Numerous sirens were sounded in the Gaza vicinity throughout the night.

All schools and kindergartens were expected to open as planned Wednesday in the Gaza vicinity communities.

One rocket landed inside a community in the Eshkol Regional Council. A police sapper handled the rocket and the public was asked to stay away from the area until the police completed their work.

A sapper handling a rocket that landed in the Eshkol Regional Council (Photo: Israel Police)

On Wednesday afternoon, the IDF fired warning shots near a cell dispatching incendiary balloons in the southern Gaza Strip. There were no reports of injuries.

The IDF defined Tuesday night's barrage as “a serious rocket offensive against Israel’s home front,” saying that “Hamas is leading the Gaza Strip and its residents to deterioration and escalation.”

The escalation occurred on the backdrop of the “kite terrorism” and the incendiary and explosive balloons dispatched from the strip, which have sparked huge fires in the Gaza vicinity. In response, the IDF attacked three targets in the southern strip shortly after midnight Tuesday, and Hamas retaliated—and claimed responsibility.

According to an IDF statement, the Air Force struck a total of 25 Hamas targets across the Gaza Strip in three waves. Eleven targets were attacked in the last wave “in four military compounds of the Hamas terror organization, including an underground training facility.”

The IDF statement added, “The Hamas terror organization led a serious rocket offensive against the Israeli home front tonight and is leading the Gaza Strip and its residents to deterioration and escalation. Hamas is responsible for everything going on in the Gaza Strip and will bear the consequences of the acts of terror against Israel’s citizens. The IDF is prepared and determined to fulfill its mission to defend Israel’s citizens and will increase its activity if necessary and following an assessment of the situation.”

“These were Hamas’ achievements in the previous conflict: Destruction, destruction and destruction. The threats made by the organization’s leaders won’t conceal the bottom line: Hamas is causing the Gaza Strip to deteriorate to escalation against the strip residents’ best interest. Hamas doesn’t care about Gaza’s residents.”

Additional sirens sounded at 2:35 am in the same areas, followed by more sirens at 2:42 am in the Eshkol Regional Council.

Hamas spokesman Fawzi Barhoum on Tuesday night praised the “courageous resistance that responded to the Israeli bombardment of its posts in Gaza. It’s its legitimate right.”

He added that “the message of a bombardment met with a bombardment is proof that the rules of the conflict are being determined by the resistance and that it won’t allow the enemy to isolate our people or impose new equations.”

Islamic Jihad spokesman Daoud Shihab threatened, “Gaza is not a fire practice area for Israel’s F-16 jets. The stage in which Israel used to operate in this space as if it were empty has come to an end. It’s the resistance’s right and duty to respond the same way, according to the conditions on the ground and as it sees fit. Praise the resistance heroes.”

A target attacked in Gaza

On Monday, IAF jets attacked nine Hamas targets in the northern Gaza Strip early Monday, in what were the most significant strikes in the fight against the incendiary kites and balloons terrorism.

During the strike, three rockets were fired at the Hof Ashkelon Regional Council, with one apparently falling inside the strip. They were accompanied by Code Red rocket-alarms at 4:40am and again at 5:13am, with the latter one heard in the city of Ashkelon's industrial area as well.

No casualties were reported from the rockets or air strikes.

The IDF Spokesman's Office said the strikes were in response to the incendiary and explosive balloons and kites being launched at Israel from the Gaza Strip.

"These are terror attacks that endanger the residents of southern Israel," the IDF said in a statement.

"In recent days, the IDF warned and carried out several attacks near the cells responsible for the arsons and destruction of lands in Israel as well as infrastructure used by these cells," the army added.

"The IDF has intelligence information and the operational ability to further increase these strikes, and they will grow in strength as required. The IDF is determined to continue acting with increasing force against these terror activities for as long as it takes and with a variety of tools, until they stop," it went on to say.

"The Hamas terror organization is responsible for everything that happens in and from the Gaza Strip, and it will suffer the consequences," the statement concluded.