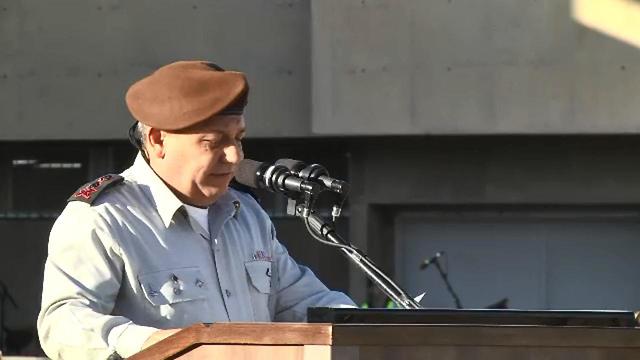 IDF chief vows to return security to residents of the south

'The IDF is working around the clock with the initiative and strength our enemies know well. We will continue targeting those who seek to harm us,' Eisenkot assures; 'We're prepared for any scenario, and it's best our enemies understand this now,' PM Netanyahu adds.

IDF Chief of Staff Gadi Eisenkot vowed Wednesday afternoon to return security to the residents of the south after the night before saw 45 rockets and mortar shells launched at Israel by terror organizations in the Gaza Strip.

"The IDF is working around the clock with the initiative and strength our enemies know well. We will continue targeting those who seek to harm us, and return the security to the residents of the south," Eisenkot said at an officers' course graduation ceremony.

"I'm convinced we will achieve this with wisdom, determination and soon," he added.

IDF Chief of Staff Eisenkot (Photo: Roee Idan)
Prime Minister Benjamin Netanyahu, also speaking at the ceremony, expressed his support of the IDF chief and the army. "Gadi, the entire nation is behind you and behind IDF soldiers," he said. He described the volatile situation in the south. "We have a blessed peace with Egypt and Jordan that lasts despite the storms over time, but we're seeing on several fronts enemies who attack us or try to attack us," the prime minister noted.

"I do not intend to go into detail about what we are planning vis-à-vis Gaza. The intensity will be stepped up as necessary. We are prepared for any scenario and our enemies would do well to understand this—now," Netanyahu warned.

Turning to the northern border, the prime minister said that "Regarding the Syrian front, we are constantly working to prevent Iranian forces and their proxies from establishing a military presence there. We will not allow those who call for our destruction to turn Syria into a base for aggression against Israel. The iron fist of the IDF is powerfully striking whoever strives to attack us, and will continue to do so."

Defense Minister Avigdor Lieberman had a message to Hamas: "For what happened yesterday, I have only (four) words for Hamas: It was a mistake."

"We're still surrounded by hatred and cruel enemies. In the Gaza Strip we're facing Hamas and Islamic Jihad, in Sinai there's ISIS, Hezbollah is on the Lebanese border, and al-Qaeda is on the Syrian border. And behind all of them is Iran," Lieberman added.

President Reuven Rivlin lamented the fact that "the fight for our home is unfortunately still not over."

"Recently, we've been facing different challenges on our northern and southern borders. Just last night, the residents of the Gaza border communities were under another criminal attack by Hamas. I want to strengthen the residents who are making the utmost effort to maintain their daily routine," Rivlin continued.

"We do not rush to battle, but if we are called to war, if we find ourselves facing conflict on one arena or another, we will act with determination against any threat," the president concluded.