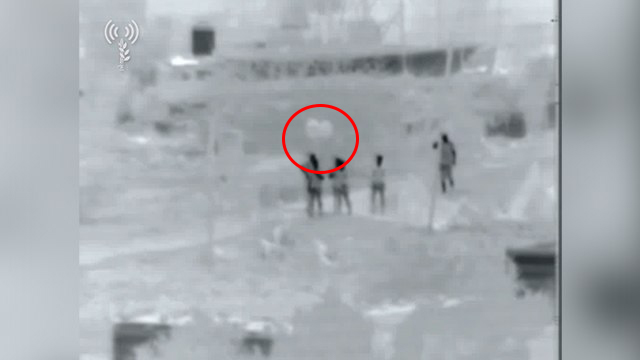 Shortly after attacking a cell launching incendiary balloons from Gaza towards Israel and wounding three Palestinians, the IDF releases video showing balloons being flown from Hamas military positions near the border.

The IDF released a video Sunday evening showing incendiary balloons being flown out of Hamas military positions on the Gaza border.

"The arson terrorism is intentional and timed by the Hamas terror organization," the IDF accused. "Hamas is leading the incendiary and explosives kite terrorism, the organization is the one behind the launching (of the balloons and kites), and it will bear the responsibility for this terror phenomenon."

The incendiary kites and balloons, which began as a trend of popular resistance, have been adopted by Hamas. "It has become apparent in recent weeks that Hamas is leading this move as an organized operation," the army said.

Describing Hamas's modus operandi, the IDF said each sector has a Hamas commander who oversees the production and launching of incendiary kites or balloons in his area.
The Hamas fighters systematically mass produce the incendiary kites and balloons using flammable materials from Hamas military positions.

Hamas cell with incendiary balloons (Photo: IDF Spokesman's Office)
When the kites and balloons are ready, the Hamas fighters launch them towards Israel in an effort to start fires there.
The IDF released images of four Palestinians it says are members in such a "fire terrorism cell."

The IDF said it was combating this form of terrorism, which targets Israeli citizens, agricultural fields and nature reserves.

"The IDF is operating with increasing force against these terror cells—by shooting near them, attacking terror infrastructure that is linked to them, and striking Hamas targets deep inside the Gaza Strip. We won't allow terrorism to serve as a threat to Israel's citizens and territory," the army said.

The video was released shortly after an Israel Air Force (IAF) aircraft attacked a cell of balloon launchers east of Gaza City, wounding three Palestinians. Earlier, the IAF fired warning shots at a cell in the southern part of the strip.
The strikes were in response to 16 fires that broke out in Israel during the day Sunday because of the incendiary balloons. Firefighting forces were able to contain all of the fires.
Meanwhile, two balloons were found in the Merhavim Regional Council that were likely flown from the Gaza Strip, with a suspicious object attached to them. Police sappers were called to the scene.