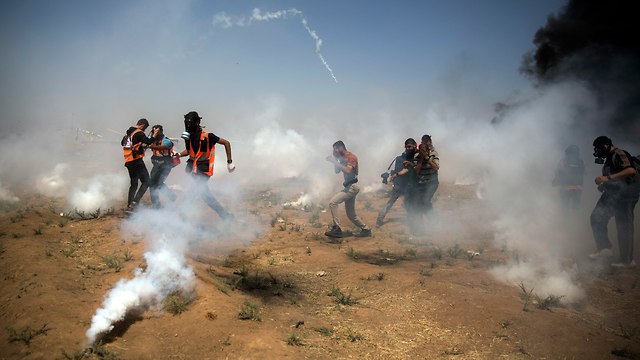 Three Palestinians were shot by IDF soldiers on Wednesday evening near the Gaza border after the army “spotted the terrorists damaging the fence and trying to infiltrate into Israeli territory from southern Gaza,” according to the IDF Spokesperson’s Unit.

The incident, which took place, east of Rafah, left the Palestinians wounded. Their condition was not immediately clear.

A 15-year-old Palestinian teen was seriously injured and evacuated to the Barzilai Medical Center in Ashkelon for treatment. His condition is described as critical.

Earlier in the day, the joint military branches of all terror organization in Gaza took responsibility for rocket fire on the Gaza border region early Wednesday morning, which they claim was in response to an Israeli attack on a Hamas militant's vehicle.

Palestinian sources familiar with the details questionws the credibility of the message implying that the overnight attacks were launched together with the Palestinian Islamic Jihad, saying that Hamas was exclusively behind the barrage.

According to the sources, the statement was issued to convey to Israel that every military action in Gaza will continue to be followed by a military response from the strip as part of Hamas’ attempt to try and change the status quo.

Overnight Tuesday an Israeli aircraft and tank attacked the vehicle of a Hamas official who is a member of a cell launching incendiary balloons into Israel.

In addition, two Hamas observation posts were attacked in the northern Gaza Strip, according to the IDF Spokesperson's Unit.

In response thirteen rockets were fired from the Gaza Strip at Israel. Three of the rockets were intercepted the Iron Dome system and no casualties were reported..

Tension on the southern border have intensified the humanitarian crisis in the Gaza Strip, prompting Israeli and world leaders to find solutions.

This week it was reported that Defense Minister Avigdor Lieberman has struck an agreement with Cypriot President Nicos Anastasiades to begin plans to build a seaport for Gaza that will operate in Cyprus and will be supervised by Israel, according to a report on Channel 2 News on Monday evening. Israel will also assist Americans leading the humanitarian relief efforts in Gaza who intend to pump huge sums of money into the economically crippled enclave as part of an effort to dramatically improve the quality of life for its residents. The handing of the benefits package, however, was said to have been made contingent upon Hamas returning slain soldiers held in Hamas captivity and the release of Israeli citizens who are still alive and who are being held by the terror group.