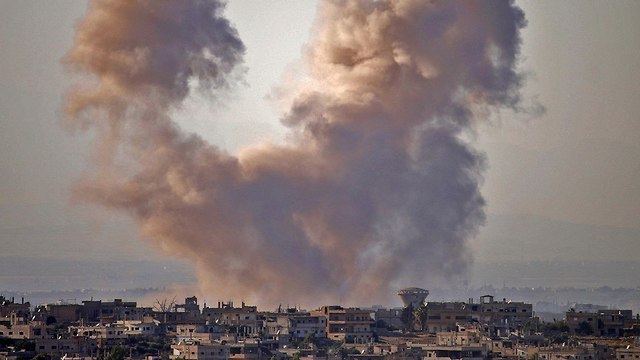 According to Arab media reports, more than 60,000 refugees from Daraa province are making their way from eastern Syria to the Israeli border at the Golan Heights; Syrian Observatory for Human Rights says air strikes have killed 46 people, including children, since Wednesday in rebel-held parts of Daraa.

More than 60,000 refugees from the Daraa province are making their way from eastern Syria to the Israeli border at the Golan Heights, Arab media reported Thursday.

The Syrian Observatory for Human Rights said Thursday that air strikes had killed 46 people, including children, since Wednesday in rebel-held parts of Daraa.

Another day of fighting in Daraa (Photo: AFP)

According to the reports, Russia is taking part in the fighting and its participation has claimed the lives of about 20 civilians.

Earlier this week, the Jordanian foreign minister said the Jordanian border would remain closed and that his country had no intention of taking in more Syrian refugees in light of concerns that the renewal of the battles in the Daraa area would send a large number of refugees to the border.

Official Syrian news agency SANA presented a different picture, saying that Syrian refugees were returning to their homes from Lebanon after "the Assad army liberated the areas they lived in."

"As you know, we started withdrawing our forces during my visit to Hmeimim base. This withdrawal continues now," Putin said at a ceremony for military college graduates in the Kremlin.

The London-based Arabic-language Al-Hayat newspaper quoted a Western diplomat on Thursday as saying that the United States and Russia would discuss a full Iranian withdrawal from Syria during a July 15 summit between Putin and US President Donald Trump.

According to the diplomat, "The US will give Israel the green light to attack any Iranian presence in Syria wherever and however Israel wants to."

The diplomat added that the US was planning to focus on the issue in the discussions between the two countries, stressing that Jordan wasn't interested in an Iranian presence in Syria either.

The source noted that the US was willing to accept a situation in which Syrian President Bashar Assad would remain in power after regaining control of all of Syria.

He said Trump and Putin would discuss the issue of southern Syria and the American desire to completely clear the area of terrorist elements.