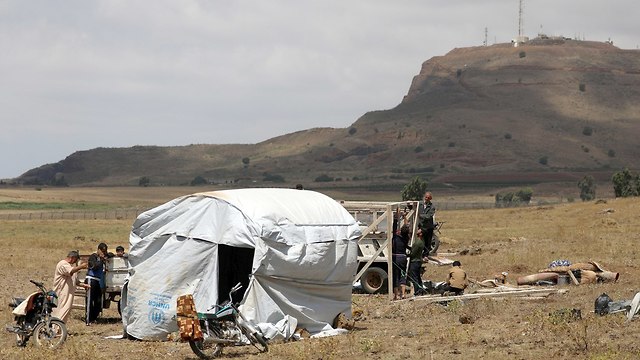 Official Jordanian source says there are confirmed reports of ceasefire that would lead to ‘reconciliation’ between opposition and government forces whose battles have stirred fears of a humanitarian catastrophe; Hezbollah leader Nasrallah: We are headed towards an important change and a major victory against all armed militias supported by US and Israel.

A Jordanian official source told Reuters on Friday there were confirmed reports of a ceasefire in southern Syria that would lead to "reconciliation" between opposition and government forces whose battles have stirred fears of a humanitarian catastrophe.

The source did not elaborate further on the reports of an agreement in the territory where Syrian government forces have been waging a campaign to regain rebel-held territory since last week.

In Washington, a State Department official said the United States could not confirm the truce report, and the situation in southern Syria remained "grim" with Russia and Syrian government forces continuing to bomb the area

Syrian refugees near an IDF post in the Golan Heights (Photo: Reuters)

Hezbollah Secretary-General Hassan Nasrallah addressed the battles in the Daraa province on Friday, saying “we are headed towards an important change and a major victory in southern Syria against all the armed militias which are supported by the United States and are receiving aid from Israel. ISIS’s fate was foretold. The militias in southern Syria are collapsing and being defeated, and they have no horizon.”

As for the refugee issue, Nasrallah said: “Not a single Lebanese leader considered forcing the refugees to return to Syria. Anyone who returns is doing it out of their own free choice. The refugees who are interested and want to return to Syria can do it without any problem, and we will make things easy for anyone who wants to return home. We have no interest in complicating this process.”

Refugees in the Daraa province (Photo: Reuters)
Moving on to the attack on the Syria-Iraq border about two weeks ago, which was attributed to Israel by an American source and which left dozens of militia fighters killed, the Hezbollah leader said: “Certain planes recently attacked a Hezbollah brigades’ site, causing many deaths. This was a major dangerous event. All the relevant elements are working hard to understand who was behind the strike, and when we find out who did it, they will be punished accordingly.”

Nasrallah took the opportunity to criticize US President Donald Trump’s immigration policy, saying that “separating immigrants’ children from their parents shows Trump’s real face as a cruel and unrestrained monster.”

The Syrian army offensive has driven tens of thousands of people towards the border with Jordan and thousands more to the frontier with the Israeli-occupied Golan Heights.

Israel and Jordan say they will not let refugees in.

"The search and engagement has not stopped with all the parties to make a success of the efforts to stop the military escalation," Ghunaimat added.

"Jordan welcomes any solution to end bloodshed and prevent the displacement of more civilians from our Syrian brothers." the spokeswoman and cabinet minister said.

Jordan has been facilitating talks between groups of Free Syrian Army rebels and the Russians over a deal that would end the fighting in return for the re-establishment of state sovereignty in Deraa province.

The IDF delivered about 60 tons of humanitarian aid to the Syrian Golan Heights on Thursday night after some 120,000 fled the southwestern part of the country in the wake of the Syrian army's onslaught in the area.

During the special overnight operation, some 300 tents, 13 tons of food, 15 tons of baby food, three pallets of medical equipment and medicine and some 30 tons of clothes and shoes were transferred into Syria from four different spots on the border.

The aid was transferred to Syrian refugee camps in the southern and central parts of the Syrian Golan. The camps, located near the border with Israel, house several thousands of Syrians under poor conditions with no access to water, electricity, food or other basic necessities.