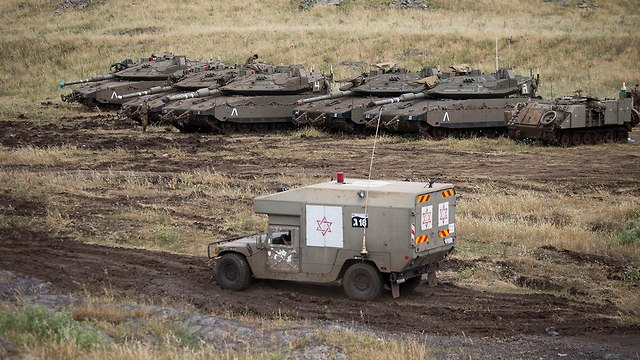 Northern Command decided to increase its presence on Israeli-Syrian border with armored and artillery forces following an evaluation of the situation there; prime minister says Israel will keep extending humanitarian aid but ‘we won’t allow anyone into our territory.’

The IDF will boost its presence on the Israel-Syria border with armored and artillery forces, the Northern Command decided Sunday morning following an evaluation of the situation on the border. The forces were deployed as part of the IDF’s preparedness in light of recent developments in the Syrian Golan Heights, near the border.

An IDF ambulance near the Syrian border in the Golan Heights (Photo: AP)
Meanwhile, Prime Minister Benjamin Netanyahu said at the start of the weekly cabinet meeting: “We will keep protecting our borders. We will keep extending humanitarian aid, but we won’t allow anyone to enter our territory. I am constantly in contact with the Kremlin and the White House on this issue.”

The forces deployed along the border include tanks and batteries of different cannons, including precision-guided artillery. Similar reinforcements have been recorded in the Golan area in recent years when tensions with Syria increased. This time, however, the army made a public announcement about it, possibly as a deterring message to the Assad forces and their Russian patron who is helping them retake the Deraa area these days, only several meters from the Golan Heights.

IDF officials believe that after Assad completes the takeover of the Deraa area, he will send forces to retake the Syrian Golan Heights, backed by pro-Iranian Shiite militias.

The IDF has made it clear to the Americans and to the Russians that they won’t agree to any foreign presence of forces in the Syrian Golan Heights apart from the official forces of the Assad army. Possible future moves concerning the Syrian issue were discussed over the weekend in a series of talks between IDF Chief of Staff Lt. Gen. Gadi Eisenkot and his American counterpart Joseph Dunford in Washington.

The Israeli army said in a statement issued Sunday morning, “The IDF sees it as highly important to maintain the 1974 Agreement on Disengagement between Israel and Syria. The IDF will also insist on the principle of non-involvement in the situation in Syria, alongside a policy of a firm response to any violation of the State of Israel’s sovereignty and creating a risk to its residents. Israel has been providing humanitarian aid for years and keeps providing it these days, in light of the necessity.”

A string of Syrian rebel-held towns and villages accepted government rule on Saturday as insurgent lines collapsed in parts of the southwest under an intense bombardment that the United Nations says has forced 160,000 people to flee.

he southwest was an early hotbed of the uprising against President Bashar Assad and defeat there would leave rebels with just one remaining stronghold -- the area around Idlib province bordering Turkey in the northwest.

Rebels met Russian negotiators on Saturday to seek peace terms for Deraa province, where most of their southwest territory is located, but said these failed. Moscow is Assad's strongest ally and its air power since 2015 has been crucial to his recapture of vast swathes of Syria.

Local groups in many towns seized by the army in recent days had negotiated their own surrender deals independently of the main rebel operations rooms after heavy air raids.

State television broadcast footage from inside the towns of Dael and al-Ghariya al-Gharbiya, where people were shown chanting pro-Assad slogans. A war monitor and a military media unit run by the government's ally Hezbollah said numerous other towns and villages had agreed to come back under Assad's rule.

Fierce battles were still roiling the area around Deraa city, near the Jordanian border, where the army was trying to capture a disused air base, rebels said, and the northwestern chunk of Deraa province remains in opposition hands.

Air raids continued in the meantime, said the monitor, the Syrian Observatory for Human Rights, as displaced people flocked to the border areas least likely to be hit and the United Nations warned about a humanitarian catastrophe.

Six Syrians, who were moderately-to-seriously wounded in the battles between the Syrian army and rebels in the southern part of the country, were transferred by the IDF to hospitals in Israel for treatment over the weekend.

Refugees in the Deraa area, some fleeing towards Israeli border (Photo: AFP)

Among the Syrian wounded are four children aged 6 to 14, whose families were reportedly all killed in the fighting.

On Friday night, the IDF Northern Command's medical forces were called to the border fence in the southern Golan Heights, where they provided the wounded Syrians with life-saving initial treatment in the field.

Troops from the IDF's 366th Division, also known as the Path of Fire Division, then transferred the wounded to hospitals in northern Israel in a complex operation.

According to the IDF, throughout

the Syrian civil war, there has been a severe shortage of medical infrastructure, doctors and medicine. The IDF has been providing Syrian civilians caught in the crossfire with life-saving humanitarian aid, while at the same time avoids interfering in the fighting.