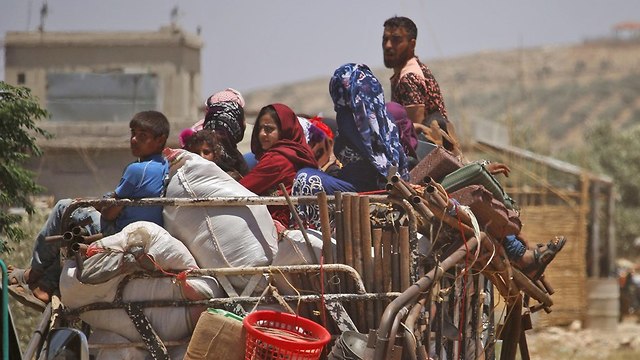 UN: Number of displaced in southern Syria climbs to 270,000

United Nations refugee spokesman presents latest figures on Syrians forced to flee their homes due to heavy bombardment, mostly taking shelter in villages and areas near the Israeli and Jordanian borders; Jordan’s foreign minister says will travel to Moscow on Tuesday to hold talks with Russian counterpart in bid to reach a ceasefire and halt displacement.

The number of people forced to flee their homes in southwestern Syria as a result of the two-week escalation in fighting has climbed to 270,000 people, the UN refugee spokesman in Jordan said.

The United Nations said last week 160,000 had been displaced as they fled heavy bombardment and mostly took shelter in villages and areas near the Israeli and Jordanian borders.

The United Nations has warned of a humanitarian catastrophe in the southwest caused by the fighting that erupted after a Russian-backed army offensive to recapture rebel-held southern Syria.

Jordan, which has taken in more than half a million displaced Syrians since the war began, and Israel have said they will not open their borders to refugees.

Jordan's Foreign Minister Ayman Safadi told reporters on Monday after a meeting with UN officials that shipments of aid were waiting to get approvals to enter into Syria from the Jordanian border.

He said he would head to Moscow on Tuesday to hold talks with his Russian counterpart over the conflict in Syria.

Russia backs a Syrian government offensive in the southern province of Daraa, which has displaced tens of thousands of Syrians, sending most of them toward the closed Jordanian border or the frontier with the Israeli-occupied Golan Heights.

Safadi said Monday said that his meeting with Sergey Lavrov would produce more understandings and will "take us more steps forward to contain this crisis and prevent more destruction."

d open channels with Damascus and Moscow and the talks would focus on reaching a ceasefire and halting the displacement.