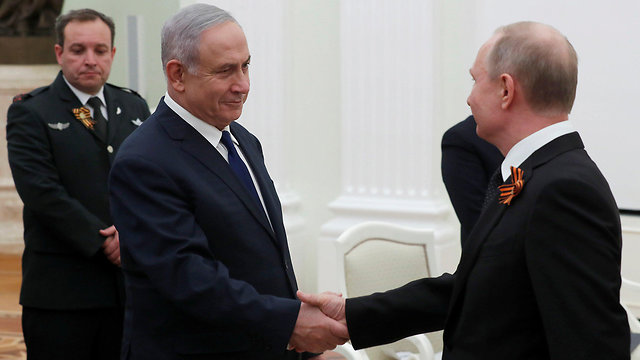 PM heads to Moscow for ‘very important’ meeting with Putin where strikes, goals and battlefields will be focus of talks regarding northern frontier with Syria before the two leaders watch England and Croatia battle it out on the soccer field, hoping for plenty of strikes and goals in the World Cup semi-final.

Prime Minister Benjamin Netanyahu landed in Moscow on Wednesday afternoon, where he will watch the World Cup semi-final after holding a “very important” meeting with Russian President Vladimir Putin to discuss an array of issues concerning Israel’s northern frontier.

Netanyahu was welcomed by Russian Deputy Foreign Minister Mikhail Bogdanov. The Israeli premier signed a soccer ball which has been signed by all the leaders who have visited Russia since the start of the World Cup.

Prior to his departure, Netanyahu and his wife, Sara, surprised two children and invited them to join in watching the soccer match.

(Photo: Reuters)
“The children—Mika Lipsker, 18, from Katzir, whom the prime minister and his wife have known for years, and Alon Eizarayev, 13, from Petah Tikva, who was born in Russia—have cancer, and will be accompanied by their parents,” a statement said from the Prime Minister’s Office.

"I am now leaving for Moscow for a very important meeting with Russian President Vladimir Putin. We will discuss Syria, Iran and Israel's security needs,” the prime minister said before boarding the plane.

(Photo: Kobi Gideon/GPO)
“I very much appreciate the excellent direct connection, without intermediaries, between myself and the Russian president. It is very important for the national security of the State of Israel,” he continued.

After the meeting with the Russian leader, Mr. and Mrs. Netanyahu will then view the semi-final between England and Croatia.

“They told us that we could bring two guests. We decided to bring with us two wonderful children who are bravely fighting cancer: Mika, whom my wife and I have known for nine years, and Alon, whose parents emigrated from Russia and who likes soccer very much. We are very moved that we can realize a dream for them,” the prime minister said.

Of course, when they ask me, 'prime minister, who will win?' I answer you as prime minister and foreign minister: 'The better team'. It should be a fascinating game," he quipped.

The meeting between Putin and Netanyahu will be the second between the two leaders within two months, with their last tête-à-tête taking place on May 9.

Israel has threatened to open fire at any Syrian government forces that try to deploy in a demilitarized Golan buffer zone set up under a 1974 UN-monitored armistice.

But on Tuesday, Israel also signalled openness to eventual ties with Syria under Assad, a tacit acknowledgement that he was re-consolidating power as he beats back the rebels.

Under Assad family rule, Syria held direct negotiations with Israel in the United States in 2000 and indirect talks mediated by Turkey in 2008, discussions predicated on a full or partial return of the Golan.

Netanyahu's government has made clear it would not now cede the plateau and has been lobbying for US recognition of Israel's claim of sovereignty there.