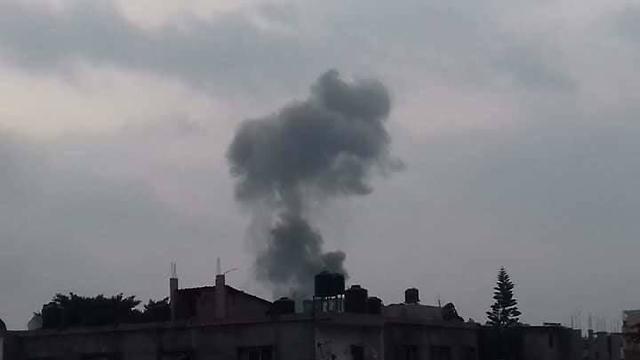 The IDF attacked two Hamas terror tunnels among other targets early Saturday in response to renewed violence on the Gaza border, to which the terror organization retaliated by firing 31 rockets and mortars at Israel.

The Iron Dome missile-defense system intercepted at least six projectiles. One projectile landed in a kibbutz in Shaar HaNegev.

There were no reports of casualties on either side, but the exchange threatened to spark further conflagration after weeks of tensions along the volatile border.

The IDF issued the following statement at 3:20am: "IAF fighter jets attacked a Hamas terror tunnel in the southern Gaza Strip overnight Friday as well as several targets in military compounds, among them locations where the Hamas terror organization assembles incendiary balloons, and a Hamas training camp."

"The strikes were in retaliation to terror incidents during the violent riots on the Gaza border fence on Friday and the ongoing balloon terrorism. The IDF identified 17 launches from Gaza into Israel," according to the statement.

The Code Red rocket-alert sirens sounded across the Gaza border communities as follows:

The Eshkol Regional Council instructed its residents to remain within 15-seconds from bomb shelters.

At about 6am Saturday, Israeli aircrafts attacked terror targets in the northern Gaza in retaliation to the renewed barrages fired at the Gaza border communities.

"The Hamas terror organization continues with its terror acts against IDF forces and security infrastructure, attempting to harm Israel's citizens. Hamas also continues using Gaza's residents as human shields and endangers them. It is a grave violation of Israel's sovereignty. Hamas's actions endanger Israel's citizens and IDF soldiers as well as hurt Gaza's residents by sabotaging the humanitarian efforts that aim to help Gazan civilians, which Israel enables," the IDF said.

"The Hamas terror organization bears the responsibility for everything that is done in and from the Gaza Strip, and it is the one to account for the ramifications of the terror attacks committed against Israel's citizens. The IDF is prepared for a variety of scenarios and is determined to fulfill its mission of protecting Israel's citizens," the IDF's statement concluded.

An IDF major was moderately wounded from a grenade thrown at him by Palestinian rioters in the northern Gaza strip on Friday, while a Palestinian teen was killed by IDF fire east of Gaza City.

The officer, who was a commander in the force that came under attack, was hit with shrapnel in his upper body and was airlifted to the Soroka Medical Center in stable condition.

In response, the force opened fire towards the terrorists who threw the grenade in northern Gaza—in the area between Gaza City's Saja’iyya neighborhood and the old Karni crossing near Kibbutz Nahal Oz—and a hit was identified.

The IDF has launched an investigation into the incident, which is the gravest one on the Israeli side since the beginning of the border protests in late March. In recent weeks, several soldiers have been lightly and moderately wounded, but mostly from ricochets and explosives thrown at the fence.

On the Palestinian side, 15-year-old Othman Rami Halles was killed, while 70 others were wounded, at least 20 by live fire, and others by tear gas. The IDF said Halles tried to cross the border fence.

In a relatively rare admission, Hamas said it fired the rockets to deter Israel from further action. Most of the recent rockets from Gaza have been fired by smaller factions. Hamas spokesman Fawzi Barhoum said it was an "immediate response" that was meant to "send a message."

As a precaution, the IDF has instructed residents in Gaza border communities to remain within 15-seconds from bomb shelters or safe rooms. The army also restricted gatherings of more than 100 people in open areas and more than 500 people in closed spaces in communities located within 0-7 kilometers from the border. The Zikim beach was also closed for entrance and bathing.