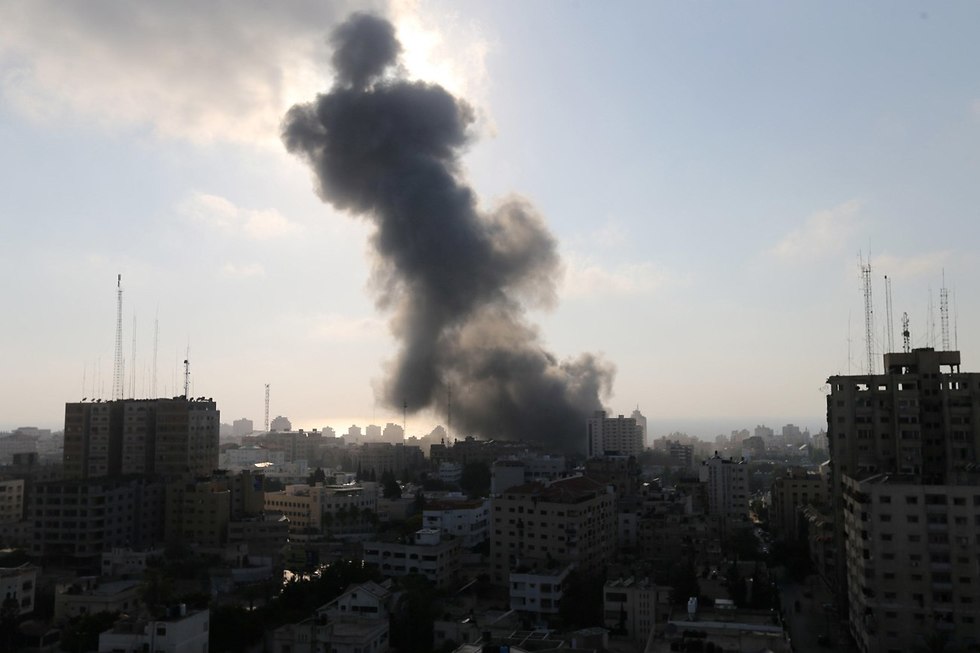 IAF focusing attacks on Hamas infrastructure as 'they have no shortage of men, and it doesn't hurt them. They invest years of work and millions of dollars into every tunnel. This is an effort that goes down the drain.'

A senior defense official explained Saturday evening that the reason for Israel's extensive campaign of air strikes in the Gaza Strip is the injury the day before of an IDF major from a grenade thrown at the force under his command during border rioting.

"This was a red line and a sufficient reason to go on the offense," the senior official said. "We made it clear that there's no such thing as us halting our fire while they continue launching (incendiary) kites. If they don't stop, we'll have to keep going."

He said the IAF attacked more than 40 quality targets on Saturday, including arms depots and terror tunnels.

"Right now, we prefer to focus on infrastructure, because they have no shortage of men, and it doesn't hurt them. Workshops and depots hurt them a lot," he explained. "They invest years of work and millions of dollars into every tunnel. This is an effort that goes down the drain."

He added that Lieberman was holding consultations throughout the day Saturday with Prime Minister Benjamin Netanyahu and IDF Chief of Staff Gadi Eisenkot, and that the Security Cabinet will convene on Sunday to allow the IDF to continue the fighting during the evening and night Saturday.

Israel, he said, believes Hamas may want to stop the rocket fire, but is unsure it would have the cooperation of the other Palestinian factions in the strip, mainly Islamic Jihad.

"Perhaps Islamic Jihad wants to prove itself and continue an independent line. The problem is that usually when Islamic Jihad begins, Hamas joins in," the official said. "Before we move onto the next stage, justice must be served. When need to show we've made every effort to prevent war."

Earlier, a senior Israeli Air Force officer said Hamas will "regret it" if it increase the range of the rockets and mortrar shells it has firing at Israeli communities.

"Hamas is limiting itself to rocket fire at a range of up to 10km from the strip's border, and it will regret if it goes beyond that range, but we're prepared for such a possibility," the IAF officer said.

The Iron Dome missile defense batteries deployed in southern Israel have intercepted at least 20 mortar shells and rockets launched since 1:30am, which could've otherwise hit structures in Israeli communities by the strip's border.

The IAF officer said Iron Dome's interception results over the weekend have been similar to the high success rates during the 2014 Operation Protective Edge and the 2012 Operation Pillar of Defense.

"We carried out the most wide-scale aerial attack in the Gaza Strip since Protective Edge. We've been preparing for this event in recent weeks, and we've determined its timing," he added.

Among the targets destroyed in the IAF's strikes was the headquarters of a Hamas battalion, which included offices, war rooms, storage areas, and an urban warfare training facility.

"The Beit Lahiya battalion of Hamas was wiped out, and this is a symbol carrying a significant message," the IAF official said, noting the attacks are still ongoing.