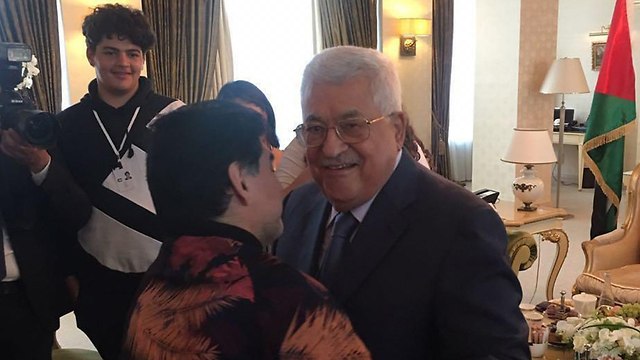 'I am a Palestinian', Maradona tells President Abbas

As PA president met with Argentine soccer star in Moscow ahead of the World Cup final, the two exchanged gifts, hugged and took pictures, with Maradona writing the ‘man wants peace in Palestine.’

Palestinian Authority President Mahmoud Abbas, who is currently in Moscow for the World Cup 2018 final, met with a former Argentine soccer star Diego Maradona, with the latter expressing his solidarity with the Palestinian leader.

In a short conversation, Maradona reportedly said to Abbas that he sympathizes with the plight of the Palestinian people, as the two embraced each other in a brief hug.

"I am a Palestinian. This man wants peace in Palestine. President Abbas has a country and has a right,” Maradona wrote on his Instagram account.

Mahmoud Abbas, for his part, complimented Maradona and presented him with a gift in honor of the meeting—a painting of a dove carrying an olive branch and olive oil.

At the end of last month, Maradona was dismissed from his position as FIFA ambassador to the World Cup following his unruly behavior in the stands during the Argentina matches.

He gave the finger to the Nigerian fans after Argentina’s dramatic victory in a third game of the group stages, before collapsing and being taken to the hospital.

In light of these events, FIFA representatives branded Maradona’s behavior "embarrassing and provocative."

Maradona has expressed support for the Palestinians in the past. When he managed a United Arab Emirates national team six years ago, he said he was a self-proclaimed "number-one supporter of the Palestinians," and a year earlier he wore a kaffiyeh and exclaimed "Long live Palestine."

On Saturday, Abbas met with Russian President Vladimir Putin during his official visit to Moscow and expressed his concerns about the stability of the region following some of the decisions made by Donald Trump, including moving the US Embassy from Tel Aviv to Jerusalem.

"We are resisting attempts by the Americans to impose their decisions on the most sensitive problems of Palestine," Russian news agencies quoted Abbas as saying in translated remarks.