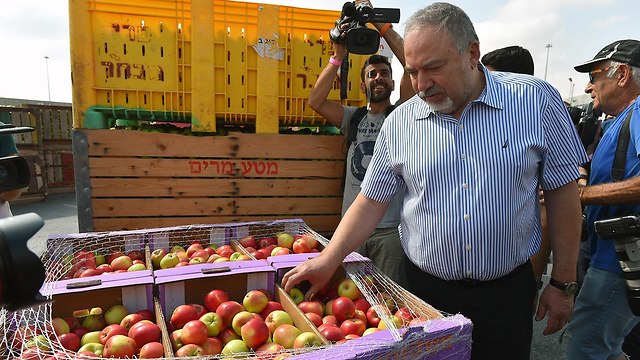 In his visit to the Kerem Shalom crossing, the defense minister says that the key to opening the border crossing is civilian pressure on Hamas leadership; 'The key is calm, zero incendiary balloons, zero friction of the fence, zero rockets, or god forbid, shootings.'

After a situation assessment in the Kerem Shalom border crossing, Defense Minister Avigdor Lieberman addressed the Palestinians on Sunday, and said the key to opening the border to transfers of goods is the continued quiet in the region.

Lieberman said that Saturday was the area's most quiet day since March 30th.

Lieberman stressed Hamas's responsibility for recent events, and conditioned the opening of the crossing on "zero incendiary balloons, zero friction on the fence, zero rockets."

The minister explained: "We have completed a situation assessment regarding the passage of goods in Kerem Shalom, and the residents of Gaza must understand that as long as incendiary balloons keep landing on our side and causing fires, on both sides of the fence, life will not go back to normal," Lieberman said.

"My message to the residents of Gaza is — take responsibility, the key, among others, is pressure. You, Gaza residents, will put pressure on teh Hamas leadership. If Saturday's quiet continues, then life will return to normal the day after tomorrow. But the key is quiet, calm, zero incendiary balloons, zero friction of the fence, zero rockets, or god forbid, shootings. Let's hope the next couple of days will be calm," Lieberman asserted.

Lieberman added that "despite the complicated situation, and the fires we have seen on our side, the transfer of food and medicines to Gaza continues. We cannot do more, and as I said, the exports of goods, agriculture, textiles, and all these things will resume once the quiet in our side of the fence continues. No balloons, no kites and no provocations," the minister said.

Defense Minister Avigdor Lieberman (Photo: Ariel Hermoni, Ministry of Defense)
"At the moment, there is no intention of bringing Palestinian workers to Israel. We are far from it, and as I said, it all depends on the other side," Lieberman concluded. Lieberman, who was accompanied by Israel's Coordinator of Government Activities in the Territories Maj. Gen. Kamil Abu Rokon, also noted that 140 trucks go through the crossing per day. "The maximum was about 1,000 trucks a day, so that's all the difference and everyone on the other side will do his calculations," Lieberman stated.

After a ceasefire was reached with Hamas following serious escalations on the Gaza border, a senior political source said on Saturday that "Hamas has suffered a hard blow, and asked for a ceasefire through Egypt, while committing to stop the fire terrorism and terrorism on the fence. We have the Egyptians' guarantee."

Lieberman at the Kerem Shalom border crossing (צילום: אריאל חרמוני, משרד הביטחון)
"In any case," the source added, "the actions on the ground will determine the next move, and if Hamas violates this, he will pay an even heavier price." The Home Front Command announced on Saturday that life is returning to normal in all the communities surrounding the Gaza Strip. The southern Zikim Beach reopened to the public. The IDF announcement made it clear that "there are no special restrictions on the home front."

However, shortly after that, the IDF attacked a Hamas position in the northern Gaza Strip. The IDF Spokesperson's said that the attack

was a response to the infiltration of several Palestinians suspects who crossed the border fence. It was reported that the suspects had returned to the Gaza Strip.