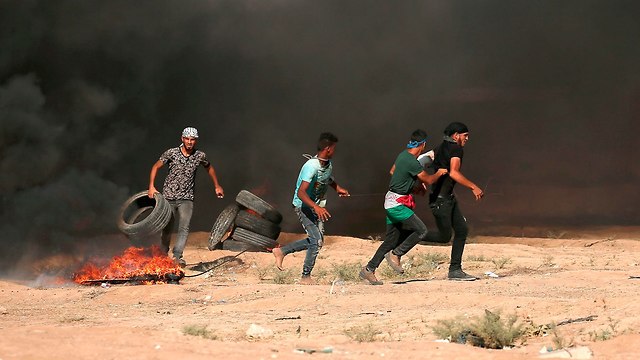 Two Palestinians were shot dead in Gaza border clashes, and at least 45 others were wounded by IDF fire, according to health officials in the strip.

The IDF said some 7,000 Palestinians took part in clashes, hurling stones at Israeli forces and burning tires on several spots along the border.

During the rioting, pipe bombs, a Molotov cocktail and a grenade were thrown at IDF soldiers. All fell inside the strip.

In addition, an IDF force identified several suspects who approached the border fence, sabotaged it and then returned to Gaza.

The Israeli troops responded with crowd dispersal measures and with live fire in accordance with the rules of engagement.

On Friday night, an IDF force came under gunfire in the northern part of the Gaza Strip. No one was hurt in the incident. In retaliation, the IAF attacked a nearby observation post.

Ghazi Abu Mustafa, 43, was shot in the head in the border fence, east of Khan Yunis, in the southern part of the strip.

Mustafa was brought to a hospital tent staffed by his wife, a medic, who collapsed when she discovered him among the casualties, her colleagues said.

Hassan Najjar told The Associated Press he witnessed Mustafa's shooting, saying soldiers shot at a group of Palestinians who rushed to the border and a bullet hit the man sitting about 250 meters away.

The second casualty was a 14-year-old Palestinian boy, who was shot in the head east of Rafah.

The Palestinian protesters had a poster with the image of 17-year-old terrorist Mohammad Tareq Yousef who murdered 31-year-old Yotam Ovadia and wounded two other Israelis in a stabbing attack Thursday in the West Bank.

In addition, Friday's protests were dedicated to the "martyr children" and included a display of a "cemetery" with the name of each of the children killed in Gaza border clashes in recent months on a "tombstone."

The children's 'cemetery' at the Gaza protests

In response, an IAF aircraft attacked an incendiary balloons cell in the northern Gaza Strip. No one was hurt.

Defense Minister Avigdor Lieberman warned Hamas on Friday that if Code Red rocket alert sirens continue to blare in Israeli communities along the Gaza border, "there'll be very strong Code Red on the other side as well."

"We very much don't want to be dragged into war. We're doing everything to avoid a wide-scale campaign, but the ball is in the other court. I very strongly advise Hamas to act wisely and with calm this weekend, and not force us to do what we know how to do but don't want to do," he said during a visit to Kibbutz Or HaNer on the Gaza border.