Fence through which the terrorist penetrated Adam

After the terror stabbing attack in Adam in which 31-year-old Yotam Ovadia had been critically wounded and later succumbed to his wounds, Adam's committee chairman says 'some parts of the fence were established in the early 1980s'; West Bank Division's security officer says most of West bank's communities are not protected.

Malfunctioned security cameras and a fence that was established in the 1980s are only some of the security problems in the settlement of Adam where 31-year-old Yotam Ovadia was stabbed to death by a Palestinian terrorist who penetrated the community Thursday.

The recent stabbing attack only stresses the security failures existing in other settlements in the West Bank.

Shortly after the terror attack in Adam, it became clear that the 17-year-old terrorist Mohammad Tareq Yousef climbed over the fence and ran towards the settlement's houses. 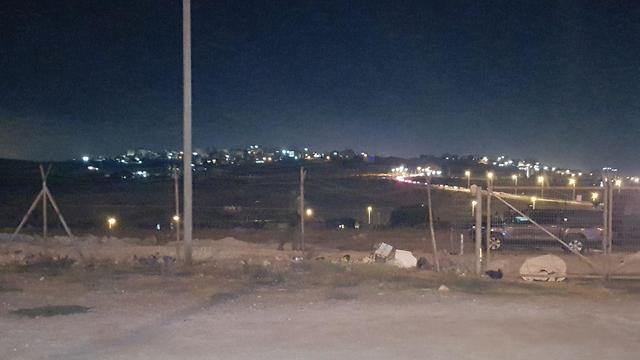 Fence through which the terrorist penetrated Adam

The fence surrounding Adam does not have any infiltration alerts. "Even prior to the terror attack we had prepared an elaborated plan (to upgrade-ed) the security measures in our community," said the settlement's Committee Chairman Beber Vaanunu. "However, there is no allocation of budgets and everything is stuck."

"Some part of the fence were established in the early 1980s. The (security) cameras have malfunctions," he elaborated.

Nevertheless, Vaanunu acknowledges that no matter how sophisticated the fence will be, "if they have the will to harm, they will harm."

Vaanunu said that during the Chief of Staff Lt. Gen. Gadi Eisenkot and the sector commnder's visit to Adam they had committed to improving the existing security systems.

"We are surrounded with Arab villages. Therefore, the security elements should be hermetic. Apart from that, We've asked to add more than 1,000 housing units. This is precisely the time to expand Adam and connect it to Jerusalem," he opined.

The Yesha Council, an umbrella organization of municipal councils of Jewish settlements in the West Bank, is also fighting for security budgets, which have yet to be allocated.

The security cost of each community is estimated at millions.

Yotam Ovadia with his family

The West Bank Division's security officer Shlomo Vaknin explained that, "After the terror attack in settlement of Neve Tzuf (Halamish) I said that we better pray for another terror attack not to happen."

He added that the defense minister had formulated a comprehensive plan to meet the needs of all Jewish communities in the West Bank. However, its cost is estimated at billions of Shekels.

"It wasn't presented before the Security Cabinet. Today, 60 of the west Bank's communities have the same fences as in Adam. The communities are not protected, despite that as opposed to other communities in Israel, the infiltration threat here is the most critical one," he elaborated.

NIS eight million are transferred every year to the west Bank's communities to bolster the existing security systems.

However, According to Vaknin, the security maintenance cost for each settlement is estimated at NIS four million per year, which means "that all the existing security systems will be upgraded only within a decade."