Screenshot of official and fake apps 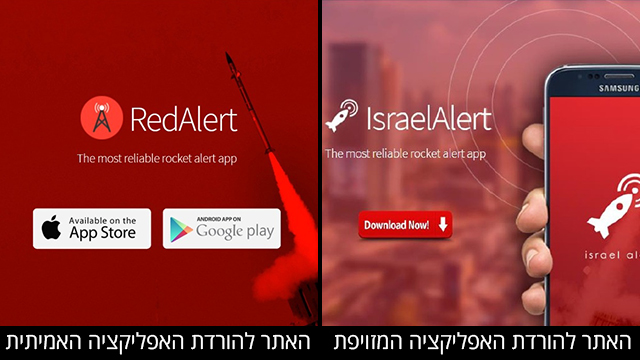 The Israeli cyber security company ClearSky announced on Thursday evening that the Hamas terror organization has launched espionage software for smartphones which pretends to be an application used by Israelis to receive Code Red alerts to warn of incoming rockets. According to the company, Hamas has attempted to make Israelis download the malware on their smartphones in an effort to take control of their devices and spy on them. ClearSky said that it believes the phony application has been in the offing for some time, but its launch was only scheduled to coincide with a barrages of rockets fired at Israel—as they were between Wednesday and Thursday—in an effort to confuse Israelis about the authenticity of genuine Code Red alert in southern Israel.

Genuine and official application download (L), fake app (R)
The application is reached via a fake website purporting to be the Israeli “Code Red” website. Israelis are then duped into downloading the app, according to the cyber security company, through the use of fictitious Facebook profiles, bots on Twitter, emails and other methods. ClearSky CEO Boaz Dolev released a statement on the matter saying that his company had discovered the hacking scheme as part of its monitoring activities, leading the firm to come across websites that mislead Israelis into installing malware. “When you the download an application, it takes control of your cell phone and enables the operator to track the device, receive its location, to take photos, record sound, make phone calls, send messages and other things that the device can do,” Dolev warned. “According to a series of data we have collected, it is clear that Hamas will time the attack as a cyber arm of the current rocket attacks on Israel,” he added.

Dolev also warned that there is no way of removing the application once it has been downloaded, urging people to only download apps from official app stores.

“Unfortunately, it looks like if the software has already been downloaded, deleting the application won't help and won’t remove the malware and the cell phone will continue to transmit all its information to the operator.”

ClearSky also identified another attempt by Hamas to attack Israeli internet browsers using a file containing malicious software which is downloaded to computers and cellular phones when a fake registration form is downloaded to Cellcom TV. Over 180 rockets were fired from Gaza between Wednesday and Thursday, with the IDF retaliating with heavy bombardments in the strip, destroying a 5-story building, as well as several terror tunnels, military complexes and other targets.