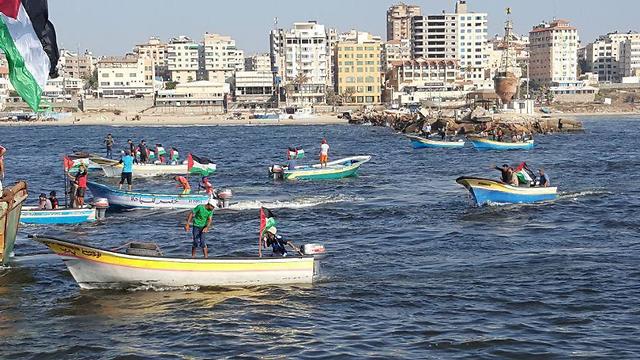 Dozens of boats from Gaza head for an Israeli maritime border as part of the "March of Return" campaign; Organizers: it's a message to the Palestinian factions—we will not agree to any arrangement that will not lead to the lifting of Gaza blockade'; IDF naval forces fire warning shots to keep the boats away from the border.

A flotilla consisting of round 40 boats set sail from the Port of Gaza to a maritime border between the Gaza Strip and Israel (near the Zikim Beach), as part of the “March of Return” campaign, it was reported on Saturday.

Protest flotillas from the strip usually head west and towards the open sea, but this time around the organizers decided to try a different approach in order to convey a message.

"The flotilla represents a message to the Palestinian factions involved in the peace agreement negotiations—we will not agree to any solution that will not lead to the lifting of Gaza blockade," explained the organizers ahead of their departure.

However, once the boats began approaching the Israeli border, the IDF naval forces had fired warning shots to keep the boats away from the border and one of the Navy ships accelerated in order to create massive waves. The boats, out of fear of capsizing, began to retreat.

In the meantime, Palestinians reported three separate IAF strikes targeting incendiary balloon units in the northern Gaza Strip and east of Gaza City. One Palestinian is reported to have been lightly injured in one of the attacks.

The IDF Spokesperson’s Unit issued a statement confirming one of the strikes.

Earlier, an incendiary balloon landed near a dining room in the Eshkol Regional Council. Gadi Yarkoni, head of the council, said he refuses to accept Hamas-led arson terror as a routine.

"We are not prepared to accept this threat as part of our everyday life, like it happened with rocket fire,” he claimed.

Meanwhile, Jamie McGoldrick, deputy UN envoy to the Middle East, arrived in Gaza on Saturday for a three-hour visit for a discussion with the Hamas leadership regarding a wide scale ceasefire arrangement with Israel.

On Friday, three Palestinians were killed and 300 others wounded in clashes that erupted during a Hamas-led protest along the Gaza border Friday as the terror group and Israel observed a cease-fire, which took hold at 10:45pm on Thursday evening.

Among the dead were a 22-year-old paramedic and a 55-year-old man, Palestinian health officials said. A third man succumbed to his injuries on Saturday morning.

Around 9,000 Palestinians took part in the protests along the fence in five different locations, some of whom set tires ablaze, hurled stones, explosives and fire bombs at troops.

The soldiers "responded with riot dispersal means and live fire, in accordance with the standard operating procedures", said the IDF Spokesperson’s Unit.

In addition, an IDF tank shelled a Hamas outpost in the northern Gaza Strip in response to a grenade that had been thrown at soldiers, said the IDF. Another outpost had also been shelled in southern Gaza.

No injuries among the Israeli forces were reported.