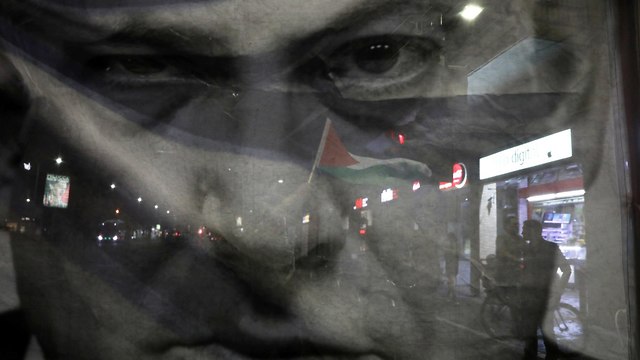 Day after protesters wave Palestinian flag in Tel Aviv's Rabin square at mass demonstration against recently-passed law, PM says events prove 'it is clearer than ever' why legislation is necessary; minister says 'Rabin would be rolling in his grave' at PLO flags in square named after him.

Prime Minister Benjamin Netanyahu accused on Sunday protesters who attended a mass demonstration the previous night against the recently-passed Nation-State Law of wanting to “turn Israel into an Israeli-Palestinian state.”

Tens of thousands of Arabs and Jews flooded Rabin Square in Tel Aviv to protest the law while chanting "With spirit, with blood we shall redeem you, Palestine". Simultaneously, dozens waved Palestinian flags in violation of a ban on the flying of any flags.

“Last night we received cogent testimony of the opposition to the existence of the State of Israel and the urgency of the Nation-State Law,” Netanyahu said at a weekly Cabinet meeting, a day after he published a video on Twitter of the Palestinian flags and chants at the rally, accompanied by similar words.

“Yesterday we saw PLO flags in the heart of Tel Aviv. We heard the calls: 'With blood and fire we will redeem Palestine.' Many of the demonstrators want to abrogate the Law of Return, cancel the national anthem, fold up our flag and cancel Israel as the national state of the Jewish people and turn it—as their spokespersons said—into an Israeli-Palestinian state, and others say: A state of all its citizens,” the prime minister said in his opening remarks.

“It is for precisely this that we passed the Nation-State Law. We are proud of our state, our flag and our national anthem. Israel is a Jewish and democratic state. The individual rights of its citizens are anchored very well in the basic laws and other laws. Now it is clearer than ever that the Nation-State Law is also necessary,” he said.

“It is necessary in order to ensure the future of the State of Israel as the national state of the Jewish people. We passed this law and we will uphold it," Netanyahu concluded his remarks.

Prior to the ministerial meeting, a host of top government officials declared their support for the law, while slamming the law’s opponents on the Left.

“Rabin is rolling in his grave over the fact that the Left supported Arabs who waved PLO flags in Rabin Square. The spectacle last night was disgraceful in my opinion,” said Culture and Sports Minister Miri Regev, who also stated her intention to take the matter to the attorney general. “Palestinian flags cannot be allowed to be waved in the center of Tel Aviv.”

Justice Minister Ayelet Shaked from the Bayit Yehudi party also berated the Left while extolling the virtues of the Nation-State Law.

“The Nation-State Law is correct and the Zionist Left should have supported it in the phrasing with which it was passed. PLO flags in Rabin Square last night proves that this is not a matter of equal civil rights because they clearly exist. This is about equal nationality and that will never be,” Shaked said.

Minister Miri Regev (Photo: EPA)
Kulanu Minister Eli Cohen also joined the chorus of opprobrium emanating from the Cabinet meeting, describing the protest as a “fifth column in the State of Israel.” The Zionist Union and Yesh Atid party, he said, were in need of some “soul searching” about why they opposed the law and about the exact clause to which they objected. “Whoever was at the protest yesterday, without doubt, does not accept the State of Israel. MK Zouheir Bahloul, who is about to retire, said that the State of Israel is not his country. I expect minorities to recognize the State of Israel,” Cohen said.

Minister Ayelet Shaked (Photo: Yoav Dudkevitch)
Former MK and Chairman of the High Follow-Up Committee for Arab Citizens of Israel, Mohammad Barakeh, however, maintained that the protesters had the right to wave the Palestinian flag, saying it was the symbol of the “oppressed Palestinian people.” “It is the flag that they are trying to erase from history using the law, but it is the flag of a proud people,” Barakeh said at the rally on Saturday night.