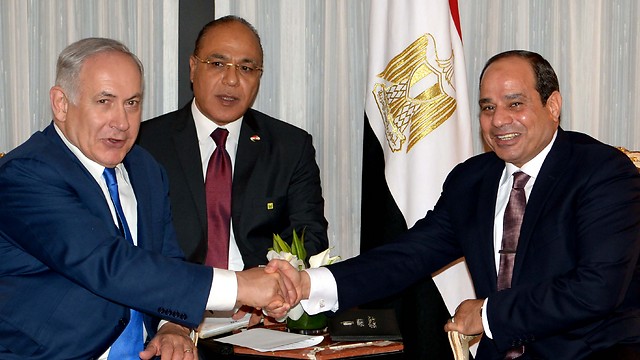 Netanyahu said to have held recent secret meeting with al-Sisi

Foreign diplomatic official says the prime minister met with the Egyptian president in a clandestine tête-à-tête; Prime Minister's Office declines to confirm or deny claim, but Palestinian official says talks, dubbed 'quiet on condition of quiet', were held in Cairo, where PM stayed for a few hours before flying back to Israel.

Prime Minister Benjamin Netanyahu held a clandestine meeting in May with Egyptian President Abdel Fattah al-Sisi, according to a foreign diplomatic source.

The Prime Minister’s Office did not immediately comment on the report.

According to Channel 10 News, the meeting took place on May 22 when Netanyahu flew with a small delegation of advisors and security guards.

He stayed in Egypt for a few hours and participated in the breaking of the Ramadan fast before returning to Israel late at night.

The Channel 10 report also claimed that government ministers were not aware of the surreptitious meeting.

Egypt has played a critical role in recent months in a bid to broker a lasting ceasefire between Israel and Hamas as tensions threaten to thrust the two warring sides into yet another military conflict.

In September 2017, the two leaders met in New York in what was their first public meeting since al-Sis took office in 2014.

The two leaders had already had secret meetings and maintain close ties that are often kept under wraps.

During their 2017 talks, Netanyahu and al-Sisi discussed ways to renew peace talks between Israel and the Palestinians.

A statement from Netanyahu's office at the time said the meeting, held at the Palace Hotel where al-Sisi is staying while in New York, was "comprehensive" and dealt with the "problems in the region."

According to a statement from al-Sisi's office, the Egyptian president stressed the importance of renewing peace talks in order to reach a just solution based on the idea of two states for two peoples.