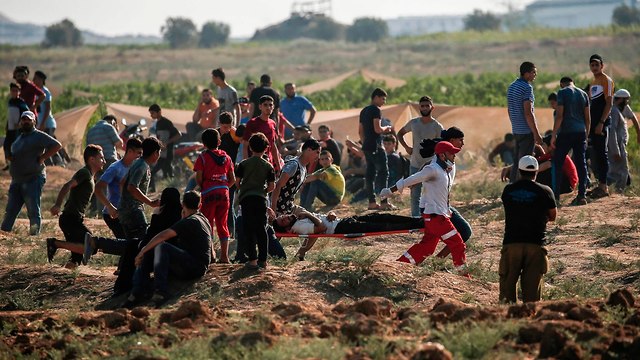 Hamas leader: Decision on ceasefire by end of August

The terror group's deputy in Gaza, Khalil al-Hayya, says negotiations regarding a long term peace arrangement with Israel will resume after the holiday of Eid al-Adha at the end of August and the talks are currently in their 'final stretch'; 'We are in favor of calm in Gaza so that our people can live in dignity'; In the meantime, riots along the Gaza border continue as two Palestinian protesters are killed in clashes with the IDF, and two fires break out in the Gaza border region.

Hamas's Gaza deputy leader Khalil al-Hayya, who is still in Cairo, said that negotiations regarding a long term ceasefire arrangement with Israel are in their “final stretch,” but will only be completed until after the holiday of Eid al-Adha (Festival of Sacrifice), at the end of August.

According to al-Hayya, the potential arrangement is based on the understandings reached following Operation Protective Edge. "We are in favor of calm in Gaza so that our people can live in dignity while continuing the fight," he said.

On Wednesday, a delegation headed by al-Hayya left Gaza for Cairo, where the representatives of the Hamas leadership abroad have been temporary residing for several days. Almost all the Palestinian factions have sent their representatives to attend the discussions in Cairo, with the exception of Fatah, whose members are still boycotting the procedures.

On Thursday, Hamas concluded a round of discussions with the representatives of other Palestinian factions in Gaza, deliberating not only the truce with Israel but also a renewal of a reconciliation process with Fatah. As previously mentioned, the talks will resume a week after the Eid al-Adha celebrations—which are expected to last all throughout the upcoming week.

Senior Hamas official Izzat al-Rishq, who was one of the terror group’s leaders present during the Cairo talks addressed the progress of the negotiations.

"Today we concluded a round of consultations with the Palestinian factions on the ceasefire arrangement with Israel and reconciliation with Fatah, and we have made it clear that we wish to adhere to the idea that all decisions should be made as part of a national framework. We presented our position on the issue and heard the position of the factions’ representatives. The talks will be renewed after the holiday," al-Rishq concluded.

On Friday, following a few days of relative calm along the southern border, hundreds of Palestinians demonstrated near the border fence. Two demonstrators were killed during clashes with IDF forces and another 60 had been injured. The protesters threw rocks and fire bombs, from behind clouds of black smoke of burning tires, at IDF troops—who responded with tear gas and sometimes live fire.

In addition, two fires broke out in the Gaza border region, one of which started in the area of the Be'eri Forest, as a result of incendiary balloons launched into Israel from the strip.

Earlier Friday, some 200 people came to support the family of the late Lieutenant Hadar Goldin, whose body has been held in the Gaza Strip for four years. Goldin's parents and brother arrived, for the 16th time, at the "Black Arrow" monument at the Gaza border.

The father, Prof. Simha Goldin, criticized Netanyahu: "After the spin doctors were frightened by the term 'cease-fire', because Hadar was killed and kidnapped during a humanitarian ceasefire, they invented a new term—'arrangement'. So from here on out, I want to say to Netanyahu—this is not a ceasefire or an 'arrangement'- it's called 'appeasement.' Netanyahu knows exactly what it is; his father wrote a lot about it."