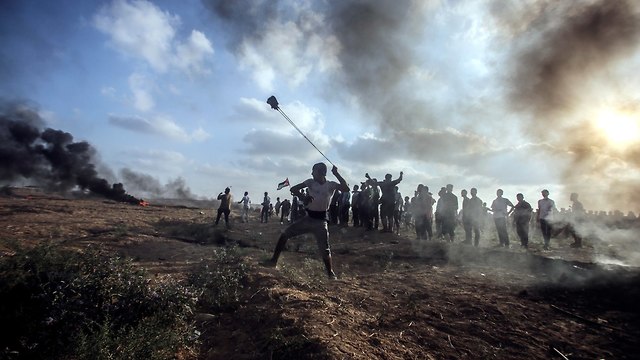 The army will investigate two incidents that took place during the 'March of Return' protests; the first in March, involving 18-year-old protester who was shot while running away from the border; the second relates to a July incident in which a 16-year-old Palestinian boy was shot near the fence by a Givati force.

The Military Advocate General's Office announced on Tuesday that the IDF will launch a criminal investigation into shooting incidents in which Palestinian youths were killed on the Gaza border fence in recent months.

The probe will examine two incidents. The first took place in March, when an 18-year-old demonstrator was shot in the back while running away from the border fence and towards Gaza. The second, an incident in which a 16-year-old Palestinian boy was shot while standing near the border fence in July.

In March, 18-year-old Abdel Fattah Abdel Nabi was seen retreating with another young Palestinian from the perimeter area (the buffer zone between the Gaza Strip and the border fence) towards other demonstrators, and was shot by a sniper with his back turned to the IDF forces.

A video of the incident shows a Palestinian protester holding a tire and running away from the border fence towards the Gaza Strip. Nabi is seen at his side, taking the tire from him.

The video then shows Nabi running away from the fence, getting hit and dropping to the ground. The video does not show Nabi's actions before his retreat. Other protesters evacuated him from the area.

In its first statement after the incident, the IDF said that "Hamas distributes various videos, including those that only show parts of events, edited and fabricated. Our forces acted according to the rules of engagement in a level-headed manner, while refraining from harming civilians whom Hamas placed on the front lines in order to embarrass Israel while endangering those civilians."

"It is the IDF's use of force that prevented a mass violation of Israeli sovereignty and a scenario in which security infrastructures are destroyed. We advise against taking Hamas's propaganda as fact," the statement read.

The second probe relates to an incident in which Osman Rami Hills, a 16-year-old Palestinian boy, was shot near the fence by a force from the IDF's Givati Brigade.

The IDF Spokesperson stated on Tuesday that "the Chief Military Advocate General, Maj. Gen. Sharon Afek, ordered a military police investigation into two incidents in which Palestinians were shot in the Gaza Strip by IDF forces. The first incident is the death of Abdel Fattah Abdel Nabi from IDF gunfire near the security fence east of Jabalia on March 30. The second incident involves the death of Osman Rami Hills from IDF gunfire near the security fence in the Karni crossing on July 13."

"The decision was made after examining the command debriefings, the findings of the General Staff's debriefing mechanism, and the information received by the IDF, following a suspicion that the shooting in these incidents was not in accordance with standard operating procedures. The findings will be examined by the Military Advocate General," the IDF Spokesperson added.