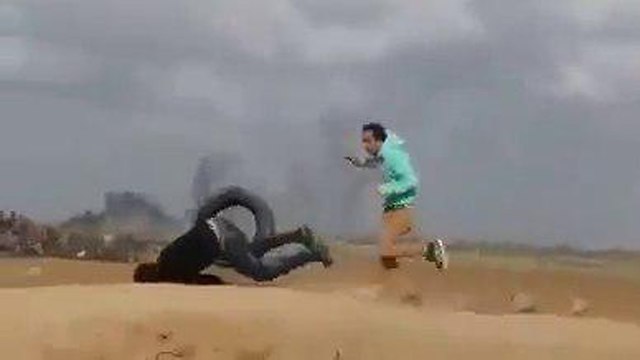 IDF to question officers about killings in violent Gaza protest

Following army's decision to launch probe into the killing of two Palestinians during the 'March of Return' protests, some 10 soldiers—including veterans and high-ranking officers—will testify or be questioned under caution; Military Police will also try to obtain testimonies from Palestinians.

Around 10 Israeli soldiers, including snipers and company commanders, are expected to testify or be questioned under caution in the coming weeks, as part of an IDF investigation that was announced on Tuesday into two incidents in which Palestinians youths were killed on the Gaza border fence during violent demonstrations.

The soldiers who are set to be called in for questioning belong to the Nahal and Givati brigades, along with Border Police snipers stationed at the Gaza border at the beginning of the 'March of Return' violent protests.

Authorities hope that their testimonies will shed light on the identity of the soldier who shot Osman Rami Hills, a 16-year-old Palestinian, near the fence last month.

Some of the soldiers who will be questioned are army veterans. Senior officers who serve as battalion or brigade commanders will also testify, but for the time being, they are not expected to be questioned under caution.

Abdel Fattah Abdel Nabi,18, shot in Gaza
The MPCID will also investigate a shooting incident in which a sniper unit shot two Palestinians at the border at the end of March. The shooting was carried out with the approval of the sector's senior officer, who is usually the commander of the battalion or the regional brigade, and in accordance with the army's rules of engagement and regulations on opening fire.

The investigation will be conducted under the supervision of the Military Advocate General's Office whose representatives are familiar with the details of the investigation.

The decision to open a criminal probe into the matter was based on information that has been acquired by the IDF in recent months.

The MPCID will also try to obtain testimonies from Palestinians who took part in the demonstrations when the incidents occured, as well as reports or testimonies of representatives of international organizations operating in Gaza.

The first probe relates to an incident that occurred at the end of March 30 next to the security fence east of Jabalia on March 30 when 18-year-old Abdel Fattah Abdel Nabi was killed.

Nabi's death made international headlines fter he was seen retreating with another young Palestinian from the perimeter area (the buffer zone between the Gaza Strip and the border fence) towards other demonstrators, and being shot in the back by a sniper.

The second probe relates to the aforementioned incident that took place near the Karni crossing on July 13 in which Osman Rami Hills was shot near the fence by a force from the IDF's Givati Brigade. Hills was seen climbing the fence when he was shot, and the shooting was apparently not carried out by a sniper.

"The decision was made after examining the command debriefings, the findings of the General Staff's debriefing mechanism, and the information received by the IDF, following a suspicion that the shooting in these incidents was not in accordance with standard operating procedures," the IDF Spokesperson's Unit said.

"The findings will be examined by the Military Advocate General, and the General Staff's debriefing mechanism, led by Brig. Gen. Moti Baruch, examined all Gaza border incidents, codenamed in the IDF as "Gatekeepers' Alert," the statement concluded.