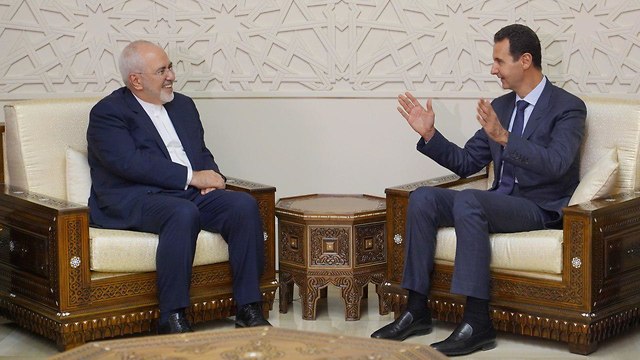 Syria's President meets Iranian foreign minister Zarif in light of growing tension in region; the two discuss upcoming summit with Russia, Iran and Turkey, and agree that 'pressures exerted by some Western governments will not deter both countries.'

Syria's President Bashar Assad and Iranian Foreign Minister Mohammad Javad Zarif met on Monday to discuss recent developments in Syria and the region, and prepare for the upcoming summit with Russia, Iran and Turkey.

According to a statement made by the Syrian Presidential Palace, the two leaders agreed that "the fact that the West has resorted to threats and pressure on Tehran and Damascus attests to its failure to implement the plans it has proposed."

President of Syria Bashar Hafez al-Assad and Iranian Foreign Minister Mohammad Javad Zarif
"the pressures exerted by some Western countries will not deter both countries from continuing to maintain their principles and securing the region," the statement read.

During the meeting, the two leaders discussed recent developments in Syria and the region, as well as issues on the agenda in the summit between Russia, Iran and Turkey, which will be held in Iran in the coming days.

Zarif landed in Damascus on Monday morning for talks with senior Syrian officials, in light of growing tension in the region. The Syrian newspaper Alwatan quoted a diplomatic source as saying: "The visit comes in the light of the preparations of the Syrian army and its allies for the liberation of Idlib."

As Iran prepares for talks with Syria and Russia about the last major enclave held by Syrian rebels, Zarif said that "all armed forces must be removed from Idlib."

Syrian president Assad and Iranian Defense Minister Amir Khatami (Photo: AP)
The Syrian government's forces are planning a phased offensive in Idlib and surrounding areas held by insurgents fighting Assad, who has been backed by both Russian and Iranian forces. This is a second visit of an Iranian official in Syria this past week. Iranian Defense Minister Amir Khatami arrived in Damascus a week ago for a two-day visit, during which he also met with President Assad. During his visit, Khatami signed a military cooperation deal with his Syrian counterpart Ali Abdullah Ayoub.

Regarding the military cooperation between the two countries, the Syrian defense minister said that the presence of "Iranian advisors" in Syria is the result of as an official request made by the Syrian government, in agreement with Iran.

Iran's official position is that these advisers will remain in Syria as long as Syria sees fit.

Sputnik reported that a senior Syrian official claimed that Khatami's visit dealt with rehabilitating Syria following the war, but was also meant to convey the message that the Iranian military advisers and the Syrian army tightened their relations.

According to the source, the visit is a response to the Israeli and American demand that Iran withdraw from Syria.