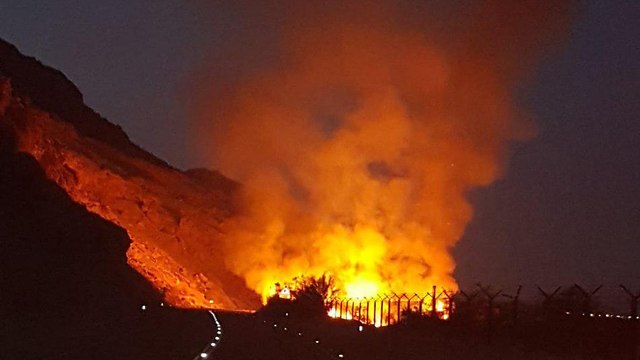 Following a mass fire destroying Tuesday hundreds of Dunams of the nature reserve near the Dead Sea, blaze sparks again; fire department manages to put out the flames.

After flaring up again Wednesday evening, firefighters have regained control over the fire which destroyed hundreds of dunams of the Ein Tzukim Nature Reserve near the Dead Sea on Tuesday.

As the fire erupted again, Highway 90 was closed to traffic and was reopened once the firefighting teams managed to put out the blaze.

The spokesman for the West Bank's fire department said two firefighting teams had operated in the northern part of the reserve, and managed to prevent the flames from spreading.

Three Palestinians suspected of executing the alleged arson attack causing the fire—residents of east Jerusalem and nearby village of Azaria—were arrested shortly after the fire sparked Tuesday morning.

According to the Israel Nature and Parks Authority, the rehabilitation of the Ein Tzukim Nature Reserve will take years.

Suspects detained on suspicion of arson (Photo: Ohad Zwigenberg)
Between 300 and 400 dunams of the reserve's unique vegetation were destroyed and many animals perished as well.

(Photo: Amir Aloni)
The police representative said at the Jerusalem Magistrate's Court hearing to extend the remand of two of the suspects that, "From looking at the pictures of the (scorched-ed) reserve, one can think he is looking at one of the Gaza border communities, rather than at the Dead Sea area."

The suspects claimed that they had been stranded without fuel and one of their friends helped them transfer fuel from his vehicle.

The police argued that "their version does not match the findings on the scene," adding there are contradictions in their narrative.

Judge Ilan Sela was asked to extend their remand by 15 days. However, he determined the suspects would remain in custody for merely two more days.

"Both are suspected of arson with the goal of causing harm to the nature site. The investigation indicates a reasonable suspicion linking them to the fire in the reserve,” Sela stated.

(Photo: Firefighters spokesman)
One of the suspects' uncle said, "They traveled to the Dead Sea to enjoy themselves, like many young people from the area do their age, and on their way back they ran out of gas, so one of the friends helped them transfer fuel from his vehicle to theirs. Then the police arrested them on charges of arson, but they have no connection (to the incident)." The mother of one of the suspects added, "My son just went for a ride and got stuck without fuel. The police claim that the fire was sparked after someone lit a cigarette and threw it near the fuel, but our son does not smoke at all."

Fire damage (Photo: Yaniv Cohen)
Attorneys Ataf Farhat and Hammad Rabah, lawyers for two of the suspects, said, "They didn't have anything against the nature reserve. They are not nature-haters.

"Were they investigated on suspicion of harming the State of Israel?" the attorneys wondered.

"Perhaps the police's allegations are satisfactory for the media but they have no basis of truth. Even if they caused the fire, it was surely not nationalistically-motivated as the police imply, they have no reason to harm birds, trees or vegetation,” they went on to say.

In 2008, a larger fire broke out following the infiltration of smugglers from the Dead Sea and since then much of the vegetation has not yet been rehabilitated.

Security forces searching for the infiltrators fired illumination bombs, with one of them leading to a huge fire that destroyed some 2,000 dunams of the reserve.