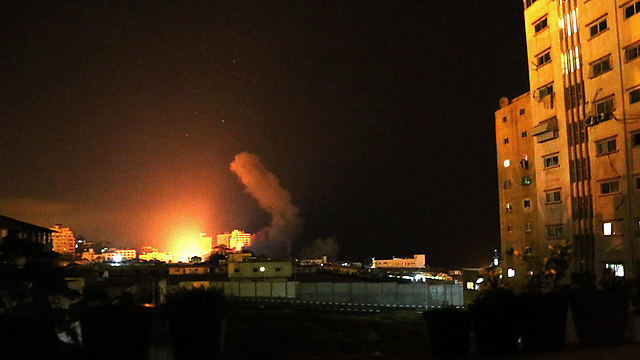 Gaza medics said on Tuesday that two Palestinians were killed by an Israeli missile strike the previous night on terrorists who the IDF said were placing a suspicious object near the Gaza border fence.

There was no immediate word on the identities of those killed in the overnight strike east of Qarara village.

An Israeli military spokesman said in a statement late on Monday an aircraft fired at "terrorists (who) suspiciously approached the security fence in the southern Gaza Strip and placed an object adjacent to the fence".

In addition, thousands gathered Monday on the beach along the border fence separating the Gaza Strip and Israel to demonstrate against Egypt and Israel's blockade.

The army says protesters burned tires and threw rocks and explosives at troops on the border, who responded with tear gas and live fire.

Earlier, a locked hand grenade connected to a balloon was found Monday afternoon on Route 234, between Kibbutz Re'im and Kibbutz Urim near the Gaza border fence.

The explosive device was located near a peanut field a day before its planned harvest.

The police closed the roads in the area to traffic, and asked the public to follow police instructions and use alternative routes. In addition, the public was asked to exercise extreme caution with regard to such suspicious objects— kites and balloons— which may contain explosives and flammable substances that may endanger public safety.

Hand grenade found in a peanut field
Gadi Yarkoni, Head of Eshkol Regional Council said in response that "the terror of incendiary balloons is escalating, now with explosives intended to increase the scope of the damage."

"The field was supposed to be harvested tomorrow, disaster was avoided this time, but we realize that incendiary balloons terror did not stop, but has escalated, now explosives are attached to balloon to increase damage," Yarkoni said.

"I expect policymakers to refrain from going back to their daily routine and from taking the growing terrorism in our communities for granted. Terror must be stopped immediately, and the threat to our lives should not become routine," he concluded.

Meanwhile, the weekly "March of Return" riots in Gaza continue. About 500 Palestinians demonstrators, who massed at several points near the Gaza border fence Saturday, burned tires, and threw stones and explosive devices toward IDF forces.

On Friday, Gaza's Health Ministry claimed that three Palestinians, including a 14-year-old boy, were killed and at least 30 had been wounded by IDF fire in the northern Gaza Strip during weekly riots.

The IDF said in response that it used necessary force in order to prevent border breaches by some 13,000 Palestinians who gathered at several points near the fence, some of them hurling rocks and fire bombs at troops, under the cover of smoke from burning tires.