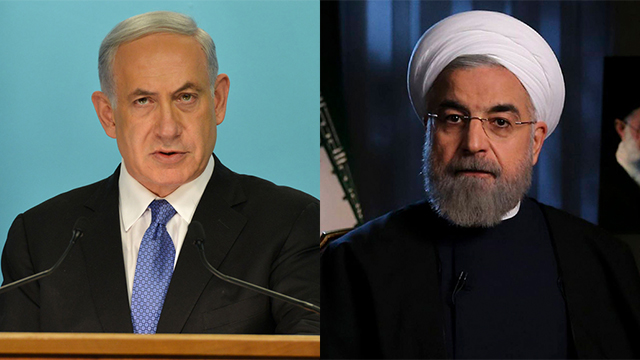 Hassan Abu-Torabi Fard says at Friday prayers that the 'resistance of Hezbollah and the people of Gaza' is in a position of strength; in apparent warning to Israel, Iranian colonel says 'enemies and arrogant powers ... will receive a pounding reply in the fraction of a second' if they hit Iran.

A prominent Iranian cleric said Friday that the time had come for Israel to say goodbye. He did not give any further information on what that could mean.

"Mr. Netanyahu, you and your intelligence services know well that the time to say goodbye has arrived and what position of strength the resistance of Hezbollah and the people of Gaza are in," Hassan Abu-Torabi Fard, the temporary Friday prayers leader in Tehran, said, according to Fars News.

The statements came in the wake of Iranian sabre-rattling with the Iranian Revolutionary Guards and army carrying out a joint aerial military drill in the Gulf on Friday in what official media said indicated the "pounding reply" that awaited the country's enemies.

Tehran has suggested in recent weeks that it could take military action in the Gulf to block other countries' oil exports in retaliation for US sanctions intended to halt its sales of crude.

Washington maintains a fleet in the Gulf that protects oil shipping routes.

"In addition to a show of strength, this ceremony is a message of peace and friendship for friendly and neighboring countries," Colonel Yousef Safipour, the deputy commander of the army for public relations said, according to the Islamic Republic News Agency (IRNA).

"And if the enemies and arrogant powers have an eye on the borders and land of Islamic Iran they will receive a pounding reply in the fraction of a second."

The statement comes a day after the leader of Lebanon’s Hezbollah terror group boasted that the group possesses “highly accurate” missiles despite Israeli attempts to prevent it from acquiring such weapons.

Hassan Nasrallah spoke in a televised speech to supporters commemorating Ashoura, one of the most important religious holy days for Shi'ite Muslims.

Mirage, F-4 and Sukhoi-22 jets took part in the exercise on Friday, according to IRNA.