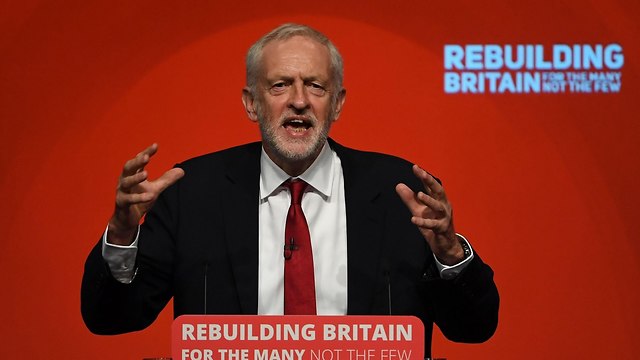 Corbyn: if elected I will recognize Palestine

The British opposition leader said that recognizing a Palestinian state would be one of his first steps if elected PM; Corbyn also condemned anti-Semitism acknowledging his party’s missteps.

Corbyn’s announcement, delivered during a speech in Liverpool, comes amidst a storm of media coverage of controversial incidents involving the Labor Party leader, such as attending events with known terrorists, that many consider to be anti-Semitic.

"Let me say a few things regarding the prevention of justice and rights of the Palestinians," Corbyn said in a speech to Labor Party members at the conclusion of the party's annual convention.

"Our party is united in condemning the shooting of hundreds of unarmed demonstrators in Gaza by the Israeli security forces and the passing of the discriminatory Nation State Law. The continued occupation, the expansion of illegal settlements and the imprisonment of Palestinian children is a scandal. We support a two-state solution — a secure Israel and a secure and feasible Palestinian state,” said Corbyn. "But a quarter of a century after the Oslo Accords, we are no closer to justice and peace and the Palestinian tragedy continues, while the world stands by," Corbyn continued. "As my good friend Uri Avnery, who passed away this year, said: 'What is the alternative to peace, a catastrophe for both peoples,' and in order to help make the two-state solution a reality, we must recognize a Palestinian state as soon as possible."

Labor Party supporters demonstrating against Israel (Photo: Reuters)
Corbyn also commented on the storm of anti-Semitic incidents in the Labor Party and said that "the conflict over anti-Semitism has caused enormous pain and anxiety in the Jewish community, and we will work together with the Jewish community to eradicate anti-Semitism both in the party and in society as a whole." Against the background of those incidents, Corbyn said that the Labor Party endured a “difficult” summer. Corbyn is known as a strong opponent of Israel, and in the past he has defined Hamas and Hezbollah as "my friends." Although his ties with radical Palestinian and Arab elements were published years ago, over the summer, the British media revealed more and more of his lesser known statements and deeds that bore a strong anti-Semitic and anti-Israeli flavor. For example, it was revealed that in 2012 he attended a conference in which Hamas prisoners released in the Shalit deal spoke and described their words as "fascinating and electrifying." Corbyn wrote in the Morningstar newspaper in praise of the conference, calling the terrorists "brothers" — and glorified their speeches. In 2014 he participated in a memorial ceremony for terrorists from the "Black September" organization, responsible for the murder of 11 Israeli athletes at the Munich Olympics. Following this exposure and the storm it aroused, Corbyn and Prime Minister Benjamin Netanyahu had a confrontation on Twitter. According to the Daily Mail, in a speech delivered in London in 2013 at a conference attended by radical Islamists and published on the website of the Hamas military wing, Corbyn said that "British Zionists" do not understand English humor even though they live in Britain all their lives. The list of speakers at the conference included anti-Semites, homophobes and conspiracy theorists. Two years after the conference, Corbyn was elected leader of the Labor Party. At the end of August, Frank Field , a veteran member of the Labor Party, announced his resignation from the party. In a statement, Field said that the Labor leadership had become an "anti-Semitic force" in Britain. Field said he had decided to quit the party because of Jeremy Corbyn's "series of attempts" to deny the anti-Semitic statements by party members.