Hamas-affiliated Lebanese newspaper says Norway is mediating a prisoner exchange deal between Hamas and Israel that may see the return of remains of IDF soldiers Lt. Hadar Goldin and Staff Sgt. Oron Shaul and Israeli citizens Avera Mengistu and Hisham al-Sayed in exchange for release of Palestinian prisoners jailed in Israel.

Norway is taking part in promoting the prisoner exchange deal between Hamas and Israel that may see the return of IDF soldiers Lt. Hadar Goldin and Staff Sgt. Oron Shaul, who were killed during Operation Protective Edge, and Israeli citizens Avera Mengistu and Hisham al-Sayed in exchange for the release of Palestinian prisoners jailed in Israel, a Hamas-affiliated Lebanese newspaper reported on Saturday.

It was also said a Norwegian envoy had visited the Gaza Strip last month and that Hamas welcomes Norway's involvement in the deal.

Hadar Goldin; Oron Shaul; Avera Mengistu
Meanwhile, a delegation of senior Hamas officials from the Gaza Strip and from abroad arrived in Cairo to hold discussions with the Egyptian intelligence head, as part of Egypt's efforts to salvage the intra-Palestinian reconciliation talks as well as promote the ceasefire negotiations with Israel.

The Gaza delegation was headed by Hamas leader deputies Khalil al-Hayya and Saleh al-Arouri. Most recent meeting between Hamas and the Egyptian intelligence was held a week ago in Gaza with the attendance of Hamas leader Ismail Haniyeh.

Western sources privy to the details of the discussions held between the Egyptian intelligence officials and Hamas told Ynet that Cairo has acceded to the request of Palestinian President Mahmoud Abbas to freeze the reconciliation talks that almost led to an intra-Palestinian agreement at the end of August.

Abbas warned at the time that any agreement signed without his consent would lead to the deepening of sanctions on the Gaza Strip and would include the Palestinian Authority halting its monthly aid package of $100 million to the strip. 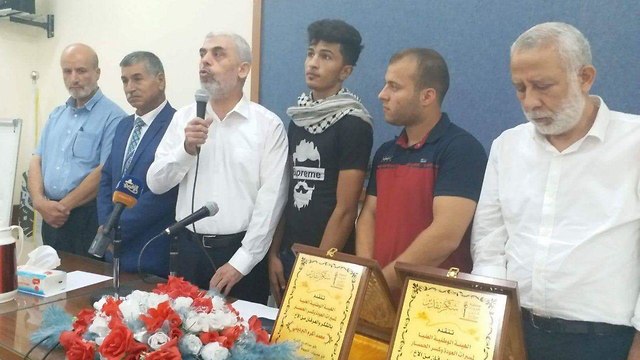 Mueller said the United Nations Office for the Coordination of Humanitarian Affairs (OCHA) will base its reports on facts and while operating out of a positive and productive approach in order to assist the civilian population in Gaza.

Abu Rokon stressed that retrieving the remains of the IDF soldiers and Israeli citizens held captive by Hamas is a moral imperative.

Three months ago, The Al-Hayat London-based newspaper reported that Germany is mediating indirect negotiations between Israel and Hamas to promote the long-awaited prisoner exchange deal.

A German diplomatic delegation was in contact with and Israel and the Palestinian Authority. In addition, a new German mediator was appointed for the task and was operating to promote the deal from Berlin.