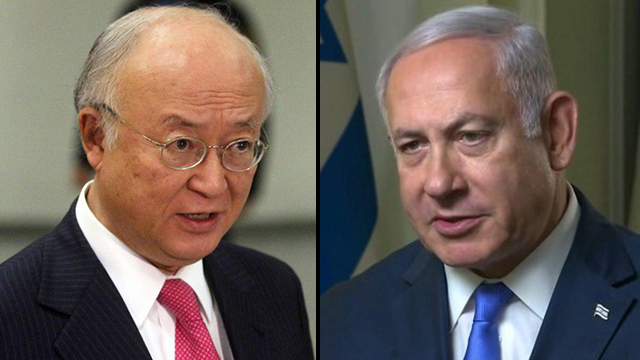 Prime Minister Benjamin Netanyahu's office called on Tuesday for the International Atomic Energy Agency (IAEA) to visit immediately the location of a “secret atomic warehouse” in Iran he described during his last week’s speech at the UN.

The call was in response to the UN nuclear watchdog’s statement earlier, questioning the validity of Netanyahu’s evidence regarding the hidden nuclear reactor in Turquzabad.

“The IAEA addresses inspections that it has carried out in various places in Iran but it does not address the specific site in Turquzabad which Prime Minister Netanyahu referred to in his UN speech,” Netanyahu's office stressed in a statement.

“There is no reason to wait. The IAEA must inspect the site and immediately dispatch monitors with Geiger counters and the prime minister's words will be seen as verifiably true," it concluded.

Earlier in the day, the IAEA issued a statement saying its independence is paramount and it does not take intelligence presented to it at face value.

"The agency sends inspectors to sites and locations only when needed. The agency uses all safeguards relevant to information available to it but it does not take any information at face value," International Atomic Energy Agency chief Yukiya Amano exclaimed.

Amano's statement made no specific reference to Israel but it is his first public pronouncement since Netanyahu's speech at the United Nations General Assembly last Thursday.

He said the IAEA has carried out so-called complementary access inspections, which are often at short notice, at all locations in Iran it has needed to visit.

"All information obtained, including from third parties, is subject to rigorous review and assessed together with other available information to arrive at an independent assessment based on the agency's own expertise," Amano added.

"In order to maintain credibility, the agency's independence in relation to the implementation of verification activities is of paramount importance," he concluded.

During a speech at the UN, Netanyahu revealed “another secret atomic facility” in Iran, some four months after he presented what he said was “conclusive proof” of a secret project underway in Iran for the development of nuclear weapons.