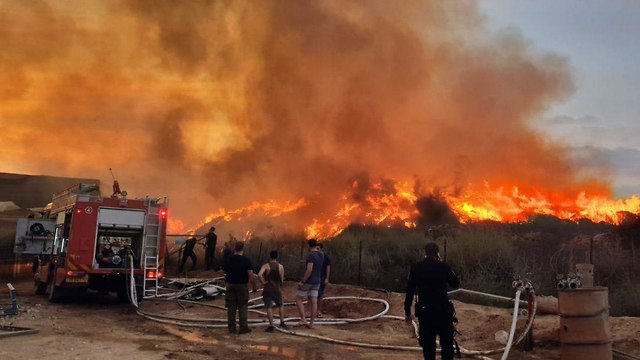 Residents report seeing balloons coming out of Gaza minutes before massive fire breaks out in moshav in the Eshkol Regional Council; firefighters, security personnel and farmers work to keep flames away from greenhouses.

One of the largest fires over the past six months broke out Saturday evening in Ein HaBesor, a moshav in the Eshkol Regional Council.

The fire was possibly caused from an incendiary balloon flown from Gaza, as minutes before the fire broke out balloons were seen being blown from the strip.

Fire at Ein HaBesor (Photo: Tamara Cohen)
Large firefighting forces, security personnel and farmers from the area are working to stop the fire from reaching the moshav's greenhouses. The fire is spreading quickly, and the residents have asked for reinforcements.

One resident told Ynet that "One of the residents of the area saw an incendiary balloon land and within minutes the fire broke out. We rushed to the place and tried to gain control of the fire, but since this is a very dry area, the fire simply spread. We're worried we might need the help of firefighting planes. A lot of people want to come and help, but it is very dangerous."

Eli Cohen, a spokesman of the southern district's fire department, said that "since this is a landfill fire, it could burn for several days and the smoke will continue spreading at the wind's direction."

He noted this was the third landfill fire in the southern district over the past two days. "The findings in previous fires pointing to it not being caused by a balloon. The conclusions will be released at the end of the investigation," Cohen said.

Earlier Saturday, a fire broke out as a result of an incendiary balloon in the Kissufim area. It was put out fairly quickly.

Friday saw several fires caused by incendiary devices from the strip on top of violent clashes on the border in which some 20,000 Palestinians took part and three were killed.

The IDF Spokesperson’s Unit said in a statement that in response to "grenades and explosive devices" hurled at troops during the protests, an IAF aircraft carried out two airstrikes on Hamas militant positions in the Gaza Strip. The statement added that some protesters crossed the fence to throw grenades on Israeli territory before returning to the strip.

Residents of kibbutz Kerem Shalom, which is also close to the Gaza border, closed themselves up in their homes on Friday because of the heavy smoke that spread throughout the area.

As a result of the violent rioting, Defense Minister Avigdor Lieberman decided Saturday to scale down the Gaza Strip's fishing zone from nine to six nautical miles.

Lieberman held consultations with senior IDF and Shin Bet officials as well as with the coordinator of government activities in the territories (COGAT) and instructed them to be prepared for "additional steps if the violent incidents continue."