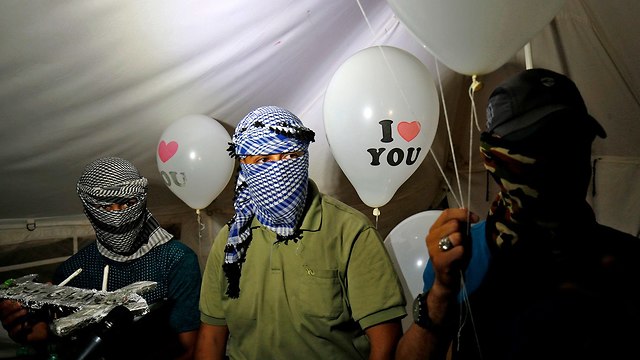 From Gaza to Ramallah: crucial days for Israeli-Palestinian relations

Analysis: the escalation of violent confrontations along the Gaza border fence, the transfer of fuel tanks, and Abbas's indifference; critical decisions will be made in the coming days in Gaza, Ramallah, Jerusalem, and Cairo.

It might be a cliché to say this in the Middle East, but in the present case the cliché rings true— the days ahead are crucial for Israel, Hamas, and the Palestinian Authority. In each sector, key decisions will be made that will greatly influence reality in the region.

Half a year has passed and almost 200 Palestinians have been killed since the launch of the "March of Return" campaign along the Gaza border fence. The campaign had ups and downs and in the past three weeks, with Hamas's encouragement, it has reached a boiling point.

Palestinians preparing incendiary balloons (Photo: AFP)
Just a few days ago, the IDF neutralized and destroyed a Hamas terror tunnel that infiltrated 200 meters into Israel from the Khan Younis area in the central Gaza Strip.

The violent demonstrations have a regular timetable known to both sides. On Mondays, a flotilla embarks from Gaza towards the strip's naval border with Israel, accompanied by a violent confrontation on the northern Gaza border, opposite Kibbutz Zikim. This week, the 11th flotilla was launched as part of the "March of Return" campaign.

On Fridays, the main riot takes place at various locations along the eastern fence of the Gaza Strip border. This Friday, the 29th demonstration has taken place along the border.

Every night, Palestinians frighten residents of the Gaza region by firing fireworks and throwing firecrackers. The nightly confrontations occur mainly in the southern part of the Gaza Strip.

On average, once a week an organized violent demonstration takes place on the Palestinian side of the Erez Crossing. For the time being, Hamas is worried that clashes might spill over into the Kerem Shalom Crossing, since it can lead to its closure by Israeli authorities. In addition, since mid-September, Hamas permitted the launch of incendiary balloons, after a brief respite.

In recent weeks, Hamas has begun to reap the harvest of the riots along the Gaza border. The constant documentation of infiltration attempts into Israel's territory and the burning of IDF positions have given a boost to the organization's propaganda war.

Hamas wants to demoralize Israel in order to prompt criticism that will force the government and the IDF to find solutions. Although some say is a military strike is the solution, Hamas thinks that after the downing of the Russian plane in Israel's northern front, the state wants to avoid a military confrontation on two separate fronts. Hamas, therefore, believes that it operates within the Israeli limits of restraint.

Meanwhile, Hamas's plan seems to be working. While criticism is heard throughout the country (especially by the media), the IDF maintains relative restraint on the ground.

Until Friday, Israel approved the entry of huge quantities of fuel into the Gaza Strip in what sources said was a Qatari and UN-backed drive to improve the conditions in the enclave and stem the escalation of hostilities. This has a major effect on life in the Strip—the Palestinians in Gaza can enjoy eight hours of electricity a day, instead of four.

Israeli officials assume that this kind of adjustments will moderate the violent confrontations on the border fence. To date, this assumption has yet to be realized on the ground. Incendiary balloons continue to fly from Gaza and set fire in the fields surrounding the border. But if we are dealing with assumptions, the most significant test will be the weekly border riots demonstrations.

Egypt as usual is in the picture and it appears that Egyptian head of Intelligence Abbas Kamel is on his way to Ramallah and Jerusalem, for a visit focused on negotiating a cease-fire deal between Israel and Hamas.

Last week, Ynet reported that there are indications Cairo might be considering focusing on ceasefire talks between Israel and Hamas and abandoning—at least at this stage—the reconciliation efforts.

There are two reasons for that: one, the futility of the reconciliation efforts; the second and more important reason is that Egypt feels Israel and Gaza are drawing dangerously close to an escalation. Kamel's visit may be related this change in tactics.

Though It is not yet clear exactly when Khan al-Ahmar— a Bedouin village in the West Bank—will be demolished, it is reasonable to assume that Israel will implement the High Court of Justice's ruling and destroy the village soon.

The Palestinian Authority has already taken control over the Bedouin struggle there and is exploiting it to attack Israel's policy in the Palestinian territories of the West Bank.

Except for the Tanzim organization, the Palestinian public is quite indifferent to this issue, but the relative calm does not guarantee it will end peacefully.

Beyond the embarrassment it caused Israel, the fact that two terrorists managed to escape after carrying out terror attacks, raises the status of these terrorists and turns them into heroes and a source of inspiration, especially among the younger generation.