The scene of the crime in Lund
Photo: sydsvenskan.se 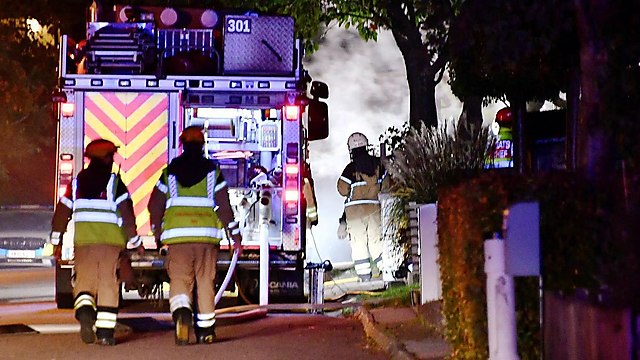 After being called a 'dirty Jewish cow', home of Swedish-Jewish politician is set ablaze; Leaders of Jewish community in country call upon the authorities to take firm steps against the rising anti-Semitism; 'Not sure Jews have a future here,' Jewish community heads add.

After receiving anti-Semitic threats—such as “we are following you”, “you dirty Jewish cow'— the home of a Jewish politician was set on fire Tuesday in southern Sweden, prompting the Swedish-Jewish community to fear for their future.

This is the second such event in Lund—a famous university city located 20 kilometers away from Malmö, Sweden’s third largest city, which has the highest rate of anti-Semitic incidents.

The scene of the crime in Lund (Photo: sydsvenskan.se)

The arson attack happened between Monday and Tuesday. Around 2am, unknown assailants threw flammable material into the politician's home, which consequently burned down entirely.

The woman is a known politician in the region, but chose to remain anonymous. Luckily, she was abroad at the time and no injuries were reported. Firefighters prevented the fire from spreading to several adjacent homes.

In the months prior to the attack, the politician received anti-Semitic threats, and filed a police complaint. Among other things, she received hate mail, calling her “a dirty Jewish cow” and threatening to “get" her.

Earlier this year, another Jewish political activist in Lund suffered from harassments as feces was thrown on his home, garbage was scattered on his doorstep, and his house was partially burned by another arson attack.

Swedish police are investigating these two cases as hate crimes, under the assumption that the crimes were probably committed by far-right individuals or neo-Nazis. The police are not ruling out the possibility of Islamists being behind the attack.

The local Jewish community believes the incidents are connected and that both cases should be dealt as anti-Semitic hate crime.

According to Aron Verstandig—chairman of The Official Council of Swedish Jewish Communities— and Fredrik Sieradzki— spokesperson for the Jewish Community of Malmö—it was an attack on Swedish democracy. "The police did not arrest a suspect. This is not the first arson attack against a Jew in the city of Lund, and the two people who were attacked are known as Jewish political activists," they said.

A source in the Jewish community said that, “it doesn't matter who is behind the attack—we fear that the victims were targeted because they are Jewish. The second attack had another agenda—to silence the politician."

The leaders of the Jewish communities in Sweden called upon the authorities to take firm steps against the rising anti-Semitism in the country, and said that the communities are assisting the woman who lost her home.

“Today many Jews are already wondering if they have a future in Sweden,” said Verstandig.

“I want to be frank. We are always on high alert that something might happen in Europe, and we have seen a rise of anti-Semitic incidents in Sweden in the past decade. Burning the homes of Jews is something new that we haven't seen here before, and we are very concerned, it definitely causes a stir in the Jewish community," Sieradzki added.

“We have very good security measures and we are prepared for the possibility that events like these can recur."

Robert Singer, Chief Executive Officer and Executive Vice-President of the World Jewish Congress, condemned the arson and said that, “this is a very serious event which should not go unanswered”.

“The World Jewish Congress calls upon the Swedish authorities to quickly investigate and bring the perpetrators to justice,” he said. “These attacks are heinous and deserve a firm condemnation. Relentless efforts must be made in order to stop these incidents from recurring,” Singer added.

According to Singer, the World Jewish Congress has accepted the community's request and decided to assist the politician with renting an apartment and funding her psychological treatment.

"The World Jewish Congress is supporting the victim and will continue to work closely with the Jewish community, in order to build strong community ties and protect their safety,” Singer claimed.

“In the past year I have met with state and police officials to discuss this matter. We hope that the new government will protect the Jewish community," he concluded.

Last December, two Palestinians and a Syrian man threw Molotov cocktails at a Jewish synagogue in Gothenburg, Sweden, in protest of US President Trump's decision to recognize Jerusalem as the capital of Israel. The fire was put out and a minor damage was caused.

The three were convicted and sent to prison: two of them received a two-year prison sentence and the third was sentenced to 15 months.

One of the Palestinians, age 22, was supposed to be deported after he completed his sentence, but the Court overruled this decision, saying that Israel would take vengeance on him and that his basic human rights will be hurt.

Israeli officials were outraged by the decision, and the Swedish Attorney General transferred the case to the Swedish Supreme Court.