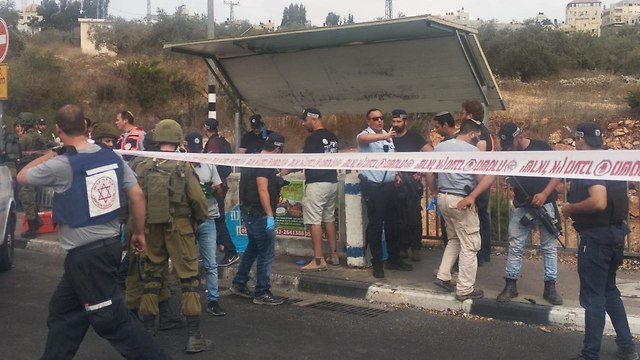 The Palestinian would-be terrorist tried to stab an IDF soldier at a bus stop at the Gitai Junction on Highway 5 and was shot dead by troops from the Artillery Corps' 55th Battalion; no soldiers hurt.

A Palestinian would-be terrorist tried to stab a soldier standing at a bus stop at the Gitai Avishar Junction on Highway 5 in the northern West Bank on Monday and was shot dead by soldiers from the Artillery Corps' 55th Battalion, who were on the scene. No Israeli troops hurt.

The Gitai Avishar Junction is a busy and central intersection on the highway linking the settlement of Ariel to central Israel. Hundreds of Palestinian workers travel through the junction on their way to Israel to work.

The junction was also the site of several attacks in the past, and is constantly guarded by two soldiers, who were the ones to shoot and neutralize the terrorist.

The head of the Samaria Regional Council, Yossi Dagan, arrived at the scene of the thwarted attack.

"The soldiers' vigilance and them taking action saved lives and prevented a terror attack," Dagan said.

This is the third terror attack in the northern West Bank over the past eight days. An IDF reservist soldier was moderately wounded and a civilian woman was lightly wounded in a stabbing attack Thursday outside the Samaria Territorial Brigade base. The terrorist was able to escape initially, but was captured several days later.