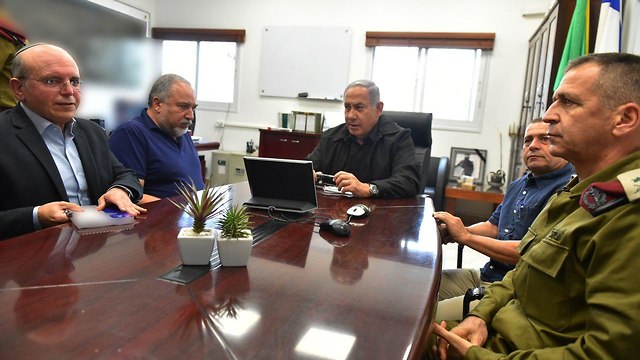 After rockets launched from Gaza landed on a house on Be'er Sheva and in the sea off the coast of a city in central Israel, prompting the IDF to retaliate, the political echelon and military brass convene to discuss possible future security developments in the strip.

The Security Cabinet convened Wednesday in Prime Minister's Benjamin Netanyahu's Office to discuss possible security development following the rocket fire launched from Gaza, hitting a house in the city of Be'er Sheva and the sea off the coast of a city in central Israel.

Chief of Staff Lt. Gen. Gadi Eisenkot attended the Cabinet meeting after cutting his work visit to the US short.

Before the meeting began, GOC Southern Command Maj. Gen. Herzi Halevi said that "Hamas presumes to control Gaza, telling the strip's residents it is trying to improve their situation.

"In practice, the rampant violence on the Gaza border in the shape of incendiary balloons, explosive devices and rockets as we witnessed Wednesday early morning, is only worsening the situation of Gaza's residents, prompting us to attack Hamas weapon manufacturing sites, headquarters and underground terror infrastructure," he elaborated.

"All the targets we attacked were destroyed, and will be very difficult to reconstruct," Halevi stated, in reference to the 20 Hamas targets the IDF struck in retaliation for the rockts launched from Gaza.

"The IDF is prepared for all future scenarios and has the know-how to respond with greater power," he concluded.

At around 8:30am, the Code Red rocket alert was once again sounded in southern Israel, this time in two communities in the Hof Ashkelon Regional Council. There have been no reports of injuries or damage. An IAF aircraft attacked the terror cell that tried to launch rockets at Israel.

Several hours later, Hamas and the Islamic Jihad released a joint statement in which they said they "oppose rocket fire that hurts the efforts to lift the siege."

The IDF Spokesperson's Unit released footage showing the IAF's attack of one of the terror tunnels in the strip.

IDF Spokesman Brig. Gen. Ronen Manelis said that only two organizations manufacture the medium-range rockets fired at Israel—Hamas and Islamic Jihad, adding the responsibility lies on Hamas, no matter which of the two terror organization fired the rockets.

According to a preliminary investigation by the Home Front Command, the rocket weighed about 20 kilograms, and penetrated through three concrete layers.

"The safety room saved the lives of those staying at home," the Home Front Command added.

Earlier, credible sources told Ynet Defense Minister Avigdor Lieberman is expected to demand at the meeting that the IDF lands a series of strong blows on the Gaza Strip at a magnitude not seen since the 2014 Operation Protective Edge.

Lieberman will likely propose to avoid a ground offensive in the Gaza Strip, but he will urge his fellow Cabinet members to press ahead with the campaign even if the Palestinians respond with rocket and missile fire at Israel, including at the Greater Tel Aviv area.

The defense minister believes the early morning rocket fire launched from Gaza only bolsters his assessment that Hamas has already thrown out the rule book on Friday, and that the terror group wishes to prove Israel surrenders to military pressure from it.

On Friday morning, Israel allowed four tankers of Qatari-funded fuel into the Gaza Strip and carried out additional relief steps at border crossings and in the Gaza fishing zone.

Despite that, Hamas terrorists blew up a hole in the border fence and mounted an attack on IDF soldiers, with three of the seven killed in Friday's clashes on the border identified as fighters from Hamas's military wing.

Lieberman will likely not receive support from all IDF generals, as some believe there is still a need and a reason to give the Egyptian mediation efforts a chance and reach an arrangement on both the security and humanitarian situation in the strip.

However, following the early morning's rocket attack and subsequent IAF strikes, there is division among the top IDF generals as well, with some supporting the defense minister's position to deliver a series of blows on the Gaza Strip now, even at the cost of escalation in violence that would last at least a few days.

In light of the current security situation in the south, the Ministry of Interior—in coordination with the Finance Ministry—immediately transferred seven million shekels to the Gaza communities' residents for emergency supplies and the continuation of routine services provided to them.

Interior Minister Aryeh Deri said that "The intolerable security conditions under which the Gaza border communities live, obligate (the government) to provide them with as much aid as possible.

"A special budget was transferred to the local southern authorities to assist the residents to resume their routine and prepare themselves for emergency," he explained.

Netanyahu visited today the Gaza Division, where he held a situation assessment with the heads of the IDF and the defense establishment.

"I said at the outset of the government meeting this week that if these attacks (from Gaza) don't stop, we'll make them stop," he said.

"Israel will act with great force," he vowed.

Meanwhile, an Israeli official confirmed Wednesday that Egyptian intelligence head Abbas Kamel would not arrive in Israel, the Gaza Strip and the Palestinian Authority on Thursday as scheduled.