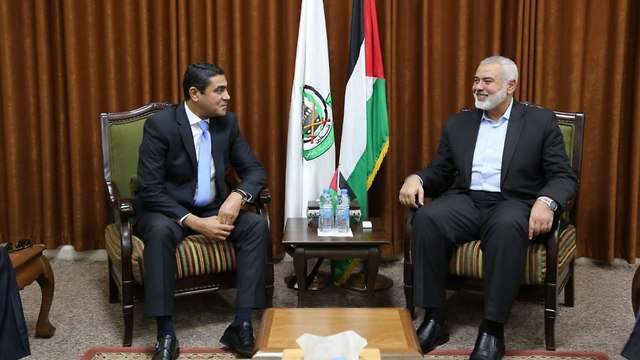 Four Egyptian intelligence officials shuttle between Israel and Gaza to discuss ceasefire and Palestinian reconciliation; UN envoy Mladenov warns 'I am afraid that there is no more time for words, now is the time for action.'

A team of Egyptian mediators on Thursday shuttled between Israel and the Gaza Strip's Hamas rulers in a stepped-up effort to forge a cease-fire between the two enemies.

The series of meetings came a day after Gaza terrorists fired a rocket that struck a home in Be'er Sheva, triggering a series of Israeli airstrikes. It was the heaviest day of fighting in several months. The four Egyptian intelligence officials entered Gaza from Israel on Thursday afternoon, and then returned to Israel after meeting with Ismail Haniyeh, Hamas' top leader.

Hamas leader Haniyeh meets with Egyptian delegation
Khalil al-Haya, a top Hamas official, said the Egyptians had discussed cease-fire efforts, as well as on-and-off attempts at reconciliation with the rival Palestinian Authority. The talks were ongoing. The Islamic militant Hamas seized control of Gaza from the Palestinian Authority in 2007, leaving the Palestinians divided between rival governments in Gaza and the West Bank. Gaza's economy has been ravaged by an Israeli-Egyptian blockade that was imposed after the Hamas takeover. Hamas has been leading weekly violent protests near the Israeli border for over six months in an attempt to ease the blockade. Those protests have intensified in recent weeks as Egyptian and UN cease-fire efforts faltered.

Hamas leadership meets with Egyptian delegation
Last week, some 14,000 Palestinians thronged to the perimeter fence, burning tires and throwing rocks, firebombs and grenades at soldiers on the other side. Some 20 Palestinians breached the border last Friday, and seven Palestinians were killed, including four who the military said had entered Israel and approached a military position. Israel responded by cutting off Qatari-funded fuel shipments meant to ease a chronic electricity shortage. Following Wednesday's rocket attack, Prime Minister Benjamin Netanyahu convened his Security Cabinet for a lengthy, late-night meeting. But Israel refrained from further retaliation, suggesting it was giving the Egyptians a chance to restore calm. UN Mideast envoy Nickolay Mladenov urged all friends of Israel and the Palestinians to join the UN in calling on all sides "to step back from the brink" of war, calling Gaza a "powder keg." "We remain on the brink of another potentially devastating conflict, a conflict that nobody claims to want, but a conflict that needs much more than just words to prevent," he told the UN Security Council in a video briefing from Jerusalem.

UN envoy Nickolay Mladenov meets with the Hamas leadership
"I am afraid that there is no more time for words," Mladenov said. "Now is the time for action. And we must see very clear actions on all sides that de-escalate the situation. Otherwise, the consequences will be terrible for everyone." He said all parties must maintain their commitment under a cease-fire that ended the 2014 Operation Protective Edge—the third between the sides since the Hamas takeover. Mladenov said Hamas and other terror groups must immediately stop "all provocations and attacks," attempts to breach the border fence, end the use of incendiary balloons and kites, and halt tunnel construction. "Israel must restore the delivery of critical supplies to Gaza and improve the movement and access of goods and people," he said. "And Israeli security forces must exercise maximum restraint in the use of live ammunition."

A key test will be on Friday, when the next border protest is planned. Israel has demanded an end to the weekly confrontations, as well as the frequent launches of incendiary balloons into Israeli territory.

Israeli forces amass on the Gaza border (Photo: Roee Idan)
Daoud Shehab, a member of the organizing committee of the marches, said officials were encouraging protesters to stay away from the border fence. But he said he was not sure to what extent they would succeed in "restraining the public mood."

"There will be attempts to prevent them from approaching the fence. There might be a reduction of balloons," he said. "We hope there will be no human losses tomorrow. We are giving a chance to the Egyptian efforts."

The IDF, meanwhile, has ramped up its armored forces along the Gaza border in a daylight show of force following a Security Cabinet decision to escalate retaliation for any violent incidents originating in the strip.

Among the forces that amassed at the border were dozens of tanks, artillery, infantry APCs and engineering vehicles.