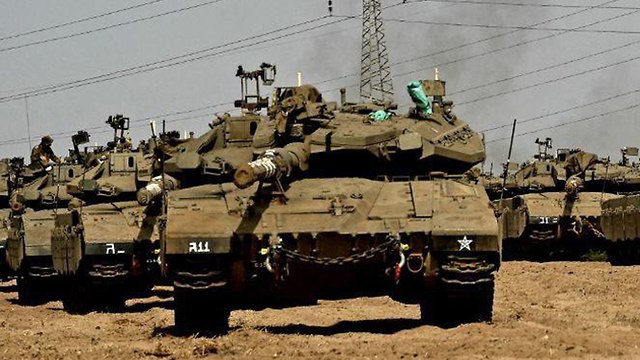 Despite Israel's warning that further escalation in Gaza would lead it to launch a military campaign in the strip, Hamas calls on the Palestinians to attend Friday's security fence protests in droves; IDF starts ramping up its armored forces along the volatile border.

The Hamas-led organizing committee of the weekly "March of Return" riots has called on the Palestinians to attend Friday's security fence protests in droves, despite the fact The IDF has started ramping up its armored forces along the Gaza border on Thursday in a daylight show of force.

However, Palestinian sources in Gaza said Hamas would instruct Gaza's residents to tone down the display of violence in light of Israel's warnings that further escalation in Gaza would lead it to launch a military campaign in the strip, following the rocket fire launched Wednesday early morning from Gaza at Israel.

A Hamas senior official said the organization launched an investigation to find the responsible for the attack during which a rocket landed on a Be'er Sheva home and in the sea off the shores of a city in central Israel early Wednesday morning, prompting an IAF retaliatory attack in the strip, AFP reported.

Israeli decision-makers believe that curbing the clashes along the border fence would restore calm there.

Skirmishes resembling to last Friday's riots during which the Palestinians placed an explosive device on the fence, with 20 of them breaching it, and prompting the IDF to open fire, would obligate Israel to launch a limited military campaign in Gaza, a credible source told Ynet.

Meanwhile, a team of Egyptian mediators shuttled Thursday between Israel and Gaza in a stepped-up effort to forge a ceasefire agreement between the two foes as well as to promote an intra Palestinian reconciliation with the Palestinian Authority.

On Wednesday, a delegation of senior Egyptian officials headed by the Egyptian intelligence head deputy met with Hamas leader Ismail Haniyeh in the strip.

Cairo is attempting to prepare the ground for the international community to establish infrastructures in the coastal enclave in order to ameliorate its humanitarian situation.

It is probable the Egyptian delegation met with Israel's top security officials before entering the strip.

Hamas official Khalil al-Haya said that "The Egyptian delegation has guaranteed us that Egyptian intelligence chief Abbas Kamel's visit was not canceled, rather postponed due to logistic reasons emanating from President Abdel Fattah al-Sisi's travels abroad."

On Thursday, the Security Cabinet decided to change its handling of the bloody riots on the Gaza border fence and the kite terrorism, stating that the rules of the game have changed.

The Cabinet instructed the IDF to gradually exacerbate its retaliatory actions to violence along the security fence and to demonstrate a zero-tolerance approach.

In addition, flight routes at Ben-Gurion Airport were changed due to the security situation. The Israel Airport Authority stressed, however, that the change "doesn't affect flights schedule."

Israelis living in communities by the border fence say they have not seen such a significant concentration of IDF forces in the area in years.