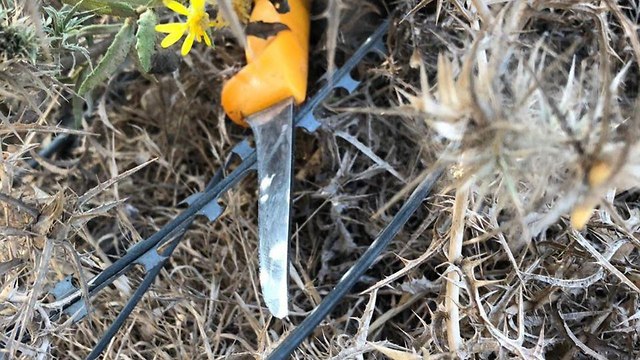 Police arrested on Saturday a 20-year-old Palestinian man armed with a knife in the settlement of Har Adar near Jerusalem, and after a preliminary investigation it was established the suspect intended to carry out a terror attack.

The suspect was arrested after local security guards alerted the police as well as Border Police, who arrived at the scene—where they found a knife. The suspect has been taken in for further interrogation.

The investigation also revealed that the suspect breached the separation barrier and began to walk through the forest west of the settlement.

Later, according to the investigation, the suspect entered Har Adar and walked about 30 meters, before catching the attention of a female security guard, who, as mentioned earlier, alerted the Jerusalem area security forces.

Chen Filipovitz, the head of the local council, issued an official statement following the incident, praising the local security forces.

"This morning a potentially serious incident was prevented due to the vigilance of our security forces … but someone along the separation barrier was not paying attention," stressed Filipovitz.

"It has been a year since the terrible terror attack we’ve been through and I expect the security forces to do things differently," he added, referring to the deadly shooting which took place near the settlement last year.

On September 2017, a 37-year-old Nimer Jamal from Beit Surik—who held a work permit for the Seam Zone in the West Bank, shot and killed a Border Policeman and two civilian security guards and seriously wounded another Israeli near Har Adar, before being shot dead by security forces.