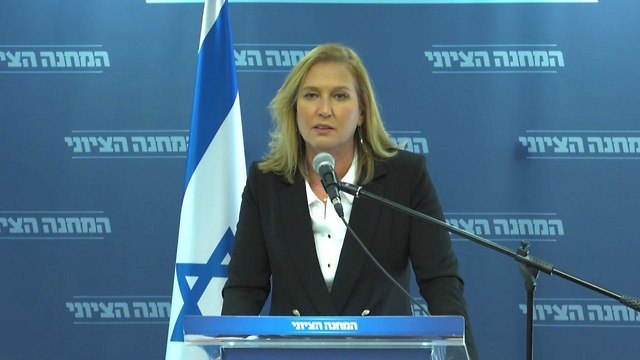 Opposition leader Tzipi Livni said Saturday that the government is secretly trying to preserve the regime of the Hamas terror group in the Gaza Strip.

"The government is hiding from the public that it has moved on from the official policy of wanting to remove Hamas from power to a secret policy of preserving the organization’s regime,” she exclaimed.

Livni’s comments come in light of the escalation of hostilities along the southern border following Wednesday's rocket attack on the city of Be’er Sheva which destroyed a residential home.

The Likud party issued an official statement in response, calling the opposition leader a “spokesperson” for Palestinian President Mahmoud Abbas.

"We call on Livni to show responsibility and stop acting like a spokesperson for Mahmoud Abbas, who pays huge salaries to those who murder Jews and tries to incite a new war on the southern border by economically strangling the residents of the Gaza Strip," stressed the statement.

Early Wednesday morning, a rocket fired from Gaza struck a Be'er Sheva house while another landed in the sea off the shores of a city in central Israel. The missile broke through two floors of concrete.

Seven people were treated for shock after the attack, including a 39-year-old Miri Tamano and her three children aged 9, 10, and 12, who were in the house when it was hit. In addition, three people were taken to the Soroka Medical Center in the city suffering from light bruising sustained when falling as they were running for shelter.

On Friday, some 10,000 Palestinians protested as part of Hamas's "March of Return" campaign at several spots along the Gaza border, with Israeli defense officials saying the clashes were the calmest over the past seven months and that Hamas has been able to rein in the violence.

However, on Saturday the violence resumed when several fires broke out in the Gaza border communities as a result of incendiary balloons flown from the strip into Israel—which prompted an IAF aircraft to strike a terrorist cell responsible for launching flammable devices.