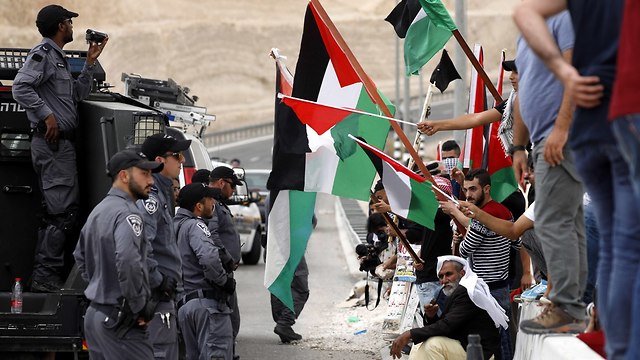 The government votes to postpone the demolition of the Palestinian-Bedouin village by 'several weeks' in order to 'exhaust the negotiations for evacuation by agreement'; Shaked and Bennett vote against decision.

The Security Cabinet approved Sunday the postponement of the evacuation of the Palestinian-Bedouin village of Khan al-Ahmar by "several weeks," in an effort to reach an agreement with the residents to willingly evacuate.

Ministers Ayelet Shaked and Naftali Bennett voted against the postponement.

“In accordance with the recommendation of professional elements, the Security Cabinet has granted an extension of several weeks in order to exhaust the negotiations for evacuation by agreement,” said the official statement.

"The Cabinet approved the evacuation of the village. What is important is the end result. The defense minister will continue to stand by his opinion that the evacuation should be carried out, regardless of whether its in agreement with the residents or not," the source exclaimed.

Reports on Saturday suggested the prime minister had decided to “exhaust all options” before moving ahead with the evacuation, but on Sunday morning Netanyahu denied agreeing to an indefinite postponement.

"I have no intention of postponing the evacuation until further notice, despite media reports ... The amount of time that might be needed to evacuate the residents with their consent will be determined by the Cabinet," he stressed.

Education Minister Naftali Bennett also vowed the hamlet “will be evacuated,” adding that the village is an “illegal construction, the demolition of which was approved by the High Court of Justice."

The Supreme Court recently rejected a final appeal against plans to demolish the village.

Justice Hanan Melcer wrote in his ruling that the evacuation might turn violent. “There is real concern of disorderly conduct and violence occuring during the demolition, especially from non-residents. Social media posts have been calling to rally against the demolition, and to use violence if necessary,” Melcer wrote.

Israel says Khan al-Ahmar was built illegally and has offered to resettle its residents a few miles (kilometers) away. Palestinians and other critics say the demolition aims to displace local residents in favor of Israeli settlement expansion.

The International Criminal Court's chief prosecutor to issue a warning that the destruction of the village might constitute a war crime.

The Bedouin tribe that lives in the village—the Jahalin—is originally from the Arad area. They settled on the territories between Ma'ale Adumim and Jericho in the 1950’s, when the land was still under Jordanian rule.