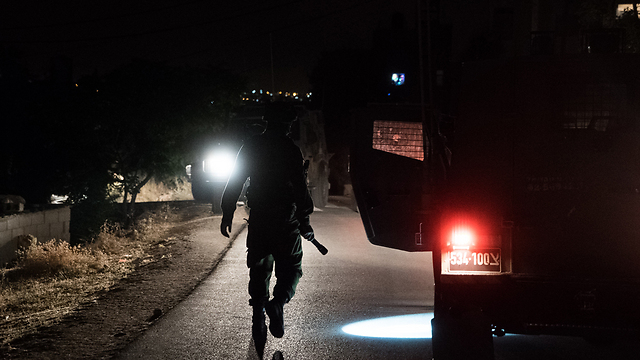 Israeli security forces put up roadblocks after an attempted terror attack targeting the soldiers from a moving vehicle at a checkpoint in southern West Bank; no casualties among the troops had been reported.

An attempted terror attack targeting IDF soldiers took place Tuesday at the checkpoint near the city of Halhul in the southern West Bank, when terrorists opened fire at Israeli troops from a moving vehicle.

The soldiers responded by shooting back at the car and set up roadblocks as part of the IDF’s manhunt for the perpetrators. No injuries among the security forces had been reported.

On Monday, a terrorist stabbed a military driver in Hebron. The driver shot and killed his attacker.

Cpl. M. serves as a combat service support driver in the IDF, but believes that despite not being a combat soldier himself, "a soldier must react like this; it doesn't matter if he's a cook or a paratrooper."

Cpl. M. was touring the area near the Cave of the Patriarchs with his commanding officer when he "heard three calls of 'Allahu Akbar.' I turned my head, and there, a meter away, I saw the terrorist holding a sharp object in his hand and jump me. I fought him, and during the fight I was stabbed in my chest and hand."

When the terrorist moved the scissors he was attacking Cpl. M. with from one hand to the other, the soldier saw an opportunity. "I took a few steps back, and he tried to stab me in the gut," he said. "In that time, I quickly cocked my rifle and shot at him to neutralize him."

"After I shot him, I made sure he wouldn't be able to get up again and stab. The entire incident lasted maybe two minutes," he added.

Golani soldiers patrolling the area then arrived at the scene from a nearby post to close off the area and isolate the scene.