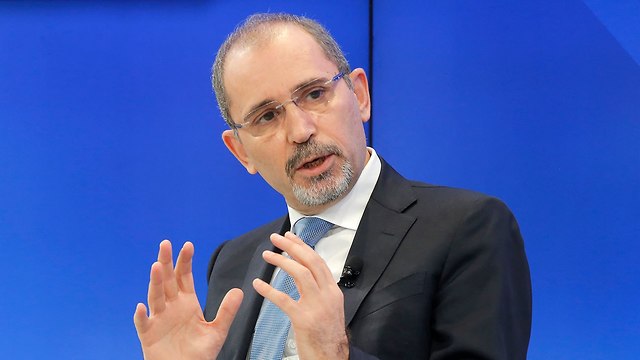 Jordanian Foreign Minister Ayman Safadi insists Amman has 'acted within the provisions of the peace treaty' in deciding not to extend Israel's lease on lands in Naharayim and Tzofar, noting 'There has never been a question of our solid commitment to the peace treaty.'

AMMAN - Jordan said on Thursday its commitment to uphold a peace treaty with Israel was not in question despite ending a 25-year special regime that allows its neighbor to use two parcels of land along its borders under its sovereignty.

Jordan formally notified Israel on Sunday it would not renew the deal over Baquora (the Island of Peace in Naharayim) where the Yarmouk River flows into the Jordan River and in the Ghumar area (the Tzofar enclave) in the southern Arava desert, where Israeli farmers have large plantations.

King Abdullah, who stressed the territories were Jordanian lands and would remain so, said the move was made in the "national interest" at a period of regional turmoil.

Jordan's Foreign Minister Ayman Safadi (Photo: AP)
Under the peace treaty, the two areas were recognized to be under Jordanian sovereignty but gave Israel special provisions to use the land and allow Israelis free access, while in the Naharayim area Israeli private property rights were respected. Foreign Minister Ayman Safadi said the deal, which was signed in November 1994, had been conceived as a temporary arrangement from the start. "That is why there was a time cap on it ... We acted within the provisions of the peace treaty. This is an indication of our commitment to the peace treaty. There has never been a question of our solid commitment to the treaty," Safadi told Reuters.

Jordan is one of only two Arab states that has a peace treaty with Israel, and the two countries have a long history of close security ties. But the treaty is unpopular and pro-Palestinian sentiment is widespread in Jordan.

The Israel-Jordan border in Naharayim (Photo: Reuters)
Safadi said the kingdom had contemplated the move for a while before the November 10 deadline. Under the peace treaty, the deal would be automatically renewed unless either of the parties notified the other a year before expiry that it wished to terminate the agreement. Prime Minister Benjamin Netanyahu acknowledged Jordan's move and said his country sought to enter negotiations on the possibility of extending the arrangement. The kingdom was now awaiting Israel invoking a provision in the treaty to hold consultations after giving notice before the deadline, Safadi said.

"There will be no negotiations over sovereignty. But we will fulfil our obligation to engage in consultations to implement the termination," Safadi added.

The Israel-Jordan border in Naharayim (Photo: EPA)
The monarch's move was hailed by parliamentarians who have been vocal against a renewal they say was humiliating and perpetuates Israeli "occupation" of Jordanian territory. Safadi said Jordan would respect its obligations towards Israelis in the peace treaty that demarcated borders for the first time since the creation of Israel in 1948. "We will fulfil our legal commitments in a manner that recognizes whatever rights there are for Israel, particularly the property rights. We will respect these rights in accordance with Jordanian laws that respects private property of non-Jordanians," Safadi added.