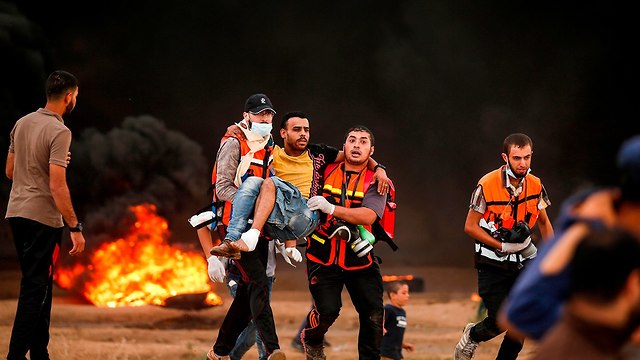 Despite earlier report by the Al-Hayat newspaper, according to which Israel and Hamas managed to reach understandings regarding a long-term ceasefire arrangement, 16,000 rioters gather along the security fence; IAF aircraft attack 3 Hamas post in northern Gaza.

Four Palestinians in their 20s were shot dead Friday during the weekly Hamas-led Gaza border riots, despite earlier report by the The Al-Hayat newspaper, according to which Israel and Hamas managed to reach understandings regarding a long-term ceasefire arrangement, which would see the lifting of the Gaza blockade in exchange for complete cessation of border violence.

Twenty-seven-year-old Palestinian was killed in the violent protests east of Jabalia, and the three other rioters aged 22, 22, and 23 were killed in the Khan Younis area in southern Gaza.

In addition, a Palestinian from the Mazra'a al-Arabiya village was shot dead by the IDF during skirmishes in the West Bank.

The IDF said it had identified two border breaches. The infiltrators returned to the strip shortly after unharmed.

Earlier, super-sized fans were stationed in Kibbutz Kerem Shalom in an attempt to prevent the smoke of the burning tires from penetrating into the Kibbutz.

Residents of several Gaza border communities received phone messages, recommending them to stay inside their houses with the windows shut.

Hamas welcomed the thousands of Palestinians taking part in the demonstration along the border fence.

"We welcome the masses in Gaza participating in the 'March of Return' protests despite the crimes of the occupation against them.

"This is our steadfast reply to all of the enemy's threats and killings. We will not give up on the "March of Return" despite Israel's terror," the terror organization stated.