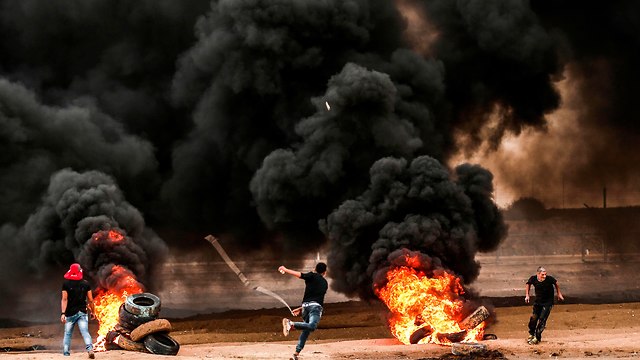 In order to give a chance to Egyptian efforts to reach ceasefire understandings with Israel, the Palestinian factions in Gaza have agreed to halt incendiary balloons, fire burning and nightly protests, but 'March of Return' will continue on Friday.

The Palestinian factions in Gaza have agreed to temporarily halt the violence on the border in order to chance the Egyptian efforts to reach ceasefire understandings with Israel, a source in the strip told Ynet on Thursday.

According to the source, the agreement between the Palestinian factions includes a halt to incendiary balloons, tire burning and the nightly protests on the border.

The "March of Return" protests will continue on Friday, but without violence or attempts to breach and sabotage the border fence.

Palestinians rioting on the Gaza border (file photo) (Photo: AFP)
Earlier, an explosive balloon was found at a kindergarten at the Eshkol Regional Council. The council said the kindergarten teacher who spotted the balloon made sure to move the children away from it and immediately report it to the community's security officer. A police sapper neutralized the explosive.

Explosive that was attached to balloon that landed in Eshkol kindergarten
In addition, the vehicle of the Sdot Negev Regional Council's security officer caught fire after apparently driving over an incendiary balloon. No one was hurt in either incident.

Burning vehicle of Sdot Negev security officer
On Thursday, a Palestinian official told Ynet that there has been progress made in efforts to reach a ceasefire between Israel and Hamas, under Egyptian mediation.

According to the most recent reports, the agreement under discussion will be implemented gradually in three stages: in the first stage, Qatar would continue its funding of fuel for the Gaza power plant as well as salaries to Hamas employees.

In the second stage, the Gaza power plant would be converted into a natural gas facility, which will reduce its cost of operations. In addition, Israel will improve its electricity supply the strip, while Egypt will improve the operations of the Rafah crossing.

The third stage includes the reconstruction of Gaza at a cost of $600 million, in accordance with a plan formulated by UN envoy to the region Nickolay Mladenov.

On its part, Hamas would stop the incendiary balloons and the attempts to sabotage the border fence. It would also keep the crowds protesting as part of the "March of Return" about 500 meters from the fence.

The two sides have already taken confidence-building steps in an effort to reduce tensions. A Palestinian source told Ynet that Hamas has shown genuine interest in reaching understandings with Israel as a result of these steps.

Senior Egyptian intelligence officials preside over the negotiations, alongside UN envoy Mladenov. The Egyptian delegation arrived in the Gaza Strip through the Erez crossing on Wednesday and met for hours with the Hamas leadership, headed by Ismail Haniyeh and Yahya Sinwar.

According to Hamas sources, the discussions mostly revolved around the Qatari money transfer mechanism, which would allow paying salaries to Gaza officials whose lost their livelihood as part of Palestinian President Mahmoud Abbas's sanctions on Gaza.

The Egyptians are proposing for the funds to be channeled through a mechanism supervised by the UN, so the money will only be used to pay salaries—except salaries of those officials who are believed to belong to the Hamas military wing.

In addition, as part of the proposal, Israel will continue to supply the strip with the Qatari-bough fuel—which according to the Palestinian sources, has allowed most Gaza households to be powered by electricity for at least eight hours a day—as opposed to the usual four hours.

On Wednesday, Israel announced that it increased the Gaza Strip’s fishing area from six nautical miles to nine. Israel has also agreed, although in principle, to build internationally funded and supervised infrastructure projects.

The Hamas-led border violence—which includes weekly border riots and incendiary kites and balloons—has gradually been decreasing. For the past week, Hamas has not been providing free transportation for those protesting along the frontier with Israel—as the terror group has done since the start of the March of Return campaign almost seven months ago.

The Egyptian delegation is expected to meet on Thursday with representatives of other Palestinian factions, as well as with the members of the March of Return organizing committee, in order to update them on the progress of the indirect talks between Israel and Hamas.

Despite the Egyptian efforts, over the past few weeks there have been multiple reports about the ceasefire agreement being reached, but each time it was followed by the intensification of the border violence and even large scale rocket attacks.