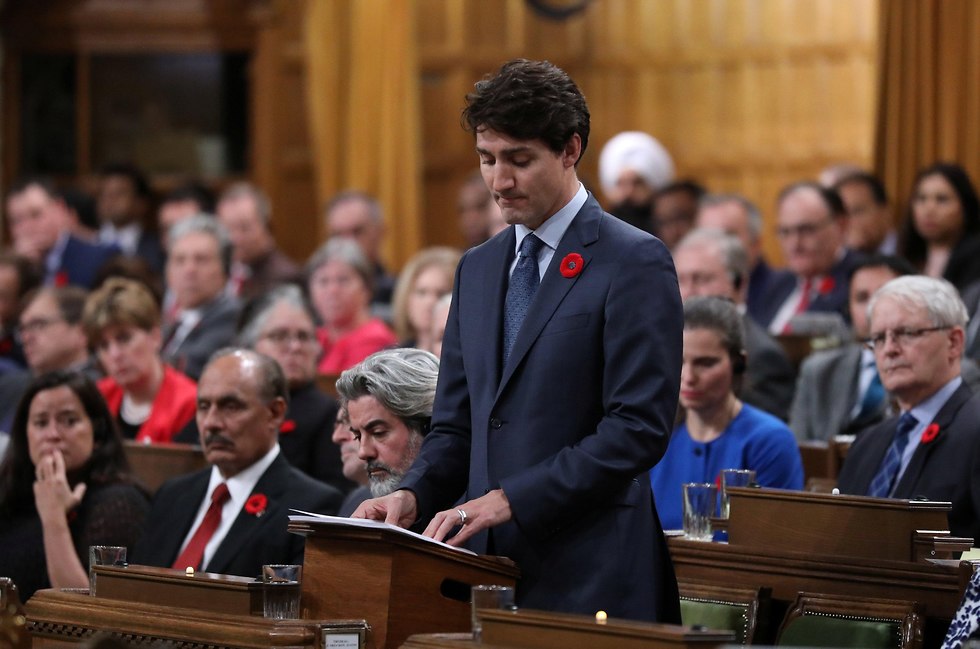 Canadian Prime Minister Justin Trudeau issues formal apology to the 907 German Jews aboard the St. Louis, which was turned down by his country, among others, and had to return to Europe, where over 250 of its passengers were murdered in Nazi death camps.

OTTAWA - Canada’s Prime Minister Justin Trudeau formally apologized on Wednesday for the country’s 1939 refusal to take in a ship carrying more than 900 Jewish refugees, adding that the country would do more to protect Canadian Jews from violence.

The St. Louis left Hamburg in May 1939 in a desperate search for a safe haven from persecution by Nazi Germany. After it was rebuffed by Canada and other nations, it returned to Europe, where historians have estimated that more than 250 of the passengers were murdered in Nazi death camps.

“We apologize to the 907 German Jews aboard the St. Louis, as well as their families,” Trudeau told the House of Commons. “We are sorry for the callousness of Canada’s response. We are sorry for not apologizing sooner.”

The apology came less than two weeks after a gunman shot dead 11 people, including a Canadian woman, at a synagogue in Pittsburgh. Vigils were held across Canada in the aftermath of the attack.

Jewish Canadians “are understandably feeling vulnerable” and there have been calls “to protect synagogues and other places that are at risk of hate-motivated crimes,” Trudeau said during his parliamentary address.

“And I pledge to you all now: we will do more,” he said, noting that around 17 percent of all Canadian hate crimes target Jewish people.

Shimon Koffler Fogel, head of the Center for Israel and Jewish Affairs, applauded Trudeau’s “historic apology” and his pledge to expand security measures for Jewish institutions.

Earlier, Trudeau met with Ana Maria Gordon, the only surviving Canadian passenger from the ship, and her family members, and spoke about the need to fight anti-Semitism.

Trudeau, a Liberal, has made a number of apologies for Canada’s historic failings.

Last week the prime minister visited hundreds of indigenous people in British Columbia to say sorry for the hanging of six chiefs 150 years ago.

In May 2016, six months after taking office, he stood in parliament to apologize to the descendents of hundreds of passengers of the Komagata Maru, a Japanese vessel carrying Sikh, Muslim and Hindu migrants who were refused entry into Canada under 1914 immigration laws.